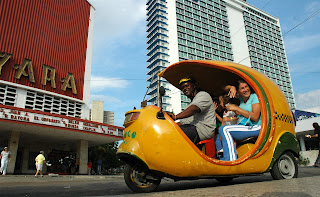 The Cuban actor Jorge Perugorría - who played the gay character named Diego in the movie Strawberry and Chocolate - told El Pais newspaper that Cuban leaders are pressing to make the socialist system more efficient.
What's going on is "an evolution within the system itself," he said, according to a post in Cuban Colada.
"Evolution is preferable to a rupture, and it is best that whatever happens in Cuba come from the government itself," the actor said. "The consequences of a rupture would be worse than a very slow change."
The full interview can be found here in Spanish.
While I was at the Dallas Morning News, we did a special section entitled "Cuba in Evolution." It was a controversial section. The folks at MinRex did not like it. The U.S. Interests Section asked for something like 50 or 100 extra copies.
Geez, I can't believe it's been 10 years ago. Here's the top of one of the Cuba in Evolution stories I wrote with Alfredo Corchado and Laurence Iliff (I can't find any links to the full special section. I found one story on the web site of a professor who has had his students analyze the story, here):
Mass Awakening: Citizens reclaim religion, begin to whisper democracy
The Dallas Morning News

COJIMAR, Cuba - A few blocks from La Terraza, one of Ernest Hemingway's sacred old watering holes, a little seaside park sat neglected for years. Joaquin Hernandez and a few friends decided to clean it up one day, clearing away the weeds and dragging jagged rocks from the water so kids could swim.

"Our neighbors were shocked. They thought we must have been drunk or something," said Mr. Hernandez, a government-employed engineer. "They said, "Let the government fix that.' We said, "Why wait?' "

Like Mr. Hernandez, people all over Cuba are beginning to take charge of their lives. For almost four decades, they've relied on the socialist government for virtually every need, from jobs and food to schooling and cradle-to-grave health care. But their cash-strapped
government can't do it all anymore, everyone agrees, so people are taking matters into their own hands, slowly empowering themselves.

No one is sure where these rumblings of civic activism will lead. They could eventually turn the land of Fidel Castro into a Western-style democracy. They could trigger a clash between reformers and pro-Castro forces. Or, Castro loyalists hope, they could bolster the
socialist revolution that began in 1959.

"We need a strong civil society," said Ariel Ricardo, an official with the Foreign Relations Ministry. "It doesn't have to be an enemy."
Posted by alongthemalecon at 7:44:00 AM

I'm curious as to what MINREX officials told you about the series 10 years ago?

Jorge Perugorría's comments were spot on I think. In response to his call for deeper economic reforms, I think the main problem is the fear that substantial market openings would immediately benefit those with access to hard currency. Unfortunately that means folks who have perhaps been skirting the law, who have family abroad, who work in tourism, etc. It would be a betrayal of everything the Revolution is about to create a system whereby those who played by the rules would be at a disadvantage. It is a sad catch-22 of course. But I think a lot of people disregard the rapid economic growth (8% plus over 3-4 years) and related progress that has been made in recent years (blackouts, transport, housing, infrastructure). A lot of the underground economy is tolerated and I think this more organic economy is what Cuban officials would be smart to let flourish.

Jorge is also a great artist by the way. A real renaissance man...

MinRex officials felt the special section was one-sided. Parts of it they liked, parts of it they didn't like.
Five reporters contributed to the section, and some of the material was pretty harsh and negative, so I can understand why some Cuban officials didn't like it. I appreciated then - as I do now - Cuban officials' point of view. I like getting feedback from the Cubans because it's usually pretty thoughtful, not just a knee-jerk response.