Cuban punk rocker is out of the slammer 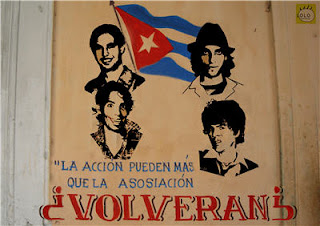 Gorki Aguilar, the Cuban rocker with a penchant for profanity, got off with a fine of about 600 Cuban pesos, according to the blog Penultimos Dias. The original charge against him - "social dangerousness," which is punishable by up to four years in jail - was reduced to "disobedience," the blog reported.
"We won the battle," his band members proclaimed on their web site, Porno para Ricardo.
I haven't seen any of the police or court documents in the case and so I don't know much about it. But I think reducing the charge is a good public relations move on the part of the Cuban government. Keeping Gorki in jail only raises his profile, drawing attention to his sharp jabs against the government and reminding the world that such peculiar crimes as "dangerousness" exist in socialist Cuba.
I haven't seen any photos of him being released, but El Blog del Dia has some nice images of his arrest. (Correction: photos are of him going to the trial on Friday Aug. 29). Update: here is an AP photo of him giving the thumbs up after his release.
I shamelessly swiped the photo of Gorki, above top, from CubaWatcher.
The other photo is from the rock group's web site. It compares Porno para Ricardo's plight with that of the Cuban spies jailed in the United States, which I'm sure is an insult to government loyalists who see the spies as patriots and have fought for years to have them released.
A note about the fine: One convertible Cuban peso equals about 24 Cuban pesos. That would mean that Gorki's 600-peso fine would be 25 convertible pesos or nearly $28 U.S. That's based on the straight exchange rate, not taking into account the surcharge you pay when you exchange U.S. dollars for convertible pesos.
Math's not my strong suit, but that's how I calculate it.
Another note: The Porno Para Ricardo web site says Gorki's last name is Aguila. Wire stories say it's Aguilar. I'm going with Aguilar on this site - if that's wrong, let me know.
Here's the AP's story on Gorki's release.
Posted by alongthemalecon at 8:09:00 PM

The pictures you describe as being of his arrest are actually of him arriving at the tribunal Friday afternoon. The $600 fine is payable in 300 installments of $2.

Here is what I wrote elsewhere as I got the news:

Gorki was let off with a $28 fine for rehearsing too loud.

I don't know how many exile rantings I read in the last 2 days that said plainly there was "no chance" of Gorki being freed. In the end, those who had a vision of a Dictator taking a musician to jail for his lyrics have the some explaining to do. Of course, they'll say it was because of the "pressure" put on the Government. But a true totalitarian system would not have produced such a scenario. A Dictator does not bow to a few bloggers when it comes to sending a message about dissent and personal disrespect. Nor do Dictators make mistakes like stirring a hornets nest without being prepared to burn it down. Prosecutors and judges would be pawns of the Dictator...

I had read that this all started with complaints from neighbors, and that they were rehearsing when police came knocking, but figured it was for drugs not noise. Putting the pieces together from all the one-sided nonsense out there is difficult. But it sounds like a an overzealous local (People's Power) delegate took up the cause and pushed for the arrest under dangerousness. Considering the blatant drugs promotion and the contacts with US diplomats, Radio Marti and extreme violent promoting elements in the US - it seemed plausible to me that the charge might actually have some merit (though I said I do not like the concept of dangerousness one bit).

Despite the focus of my previous remarks, I was never blind to the particularly perverted form of disrespect to the Revolution that Gorki seemed to relish putting out (just check the website if you haven't). But this release shows that it was not a national or Castro decision to silence him, as everyone had assumed. If a guy that says the stuff Gorki has about the Revolution and Castro can get away with it, then what does that tell you? There literally could not be someone who begged for silencing more than him (he has a whole song about Fidel performing oral sex on men).

to eight is enough -
thanks for the correction on the photos...they're of Gorki arriving at the tribunal
that's funny about the fine payable in $2 installments.
reminds me of the time I got a traffic ticket in Cuba for something like 8 cents