Cuban punkers say they have more sex than security agents 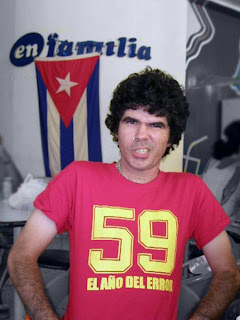 Members of a provocative Cuban punk band named Porno para Ricardo released a communique today, accusing authorities of jailing their leader for no reason, simply because "they feel like it and that's it."
Gorki Aguilar, 39, is pictured above in a band photo. His red t-shirt says: '59 - Year of the Mistake.
Ouch. That was the year Fidel Castro and his supporters defeated U.S.-backed dictator Fulgencio Batista.
Aguilar was arrested Monday at his home. He and other members of the band were about to begin rehearsing for their new CD, to be called Geriatric Central Committee.
Band members writing on www.pornopararicardo.com say Aguilar is going to go on trial for "dangerousness" on Aug. 29. Dangerousness means that you have a propensity for crime. You are arrested because authorities believe there is a high probability you'll commit a crime in the future. Such a charge is punished by up to four years in jail.
Aguilar, the father of an 11-year-old girl, has been accused of dangerousness before and served two years of a four-year sentence. Band members say on their web site:

In fact, the crime of Gorki is only one: to have the cojones to denounce abuses of tyranny against the Cuban people and the illegitimacy of the inherited regime imposed on Cuba.

In today's communique, band members say Aguilar's father has been allowed to see him in jail and he is doing OK. But he was upset that officials made references to his daughter, who turns 12 on Sept. 1.
Despite the seriousness of Aguilar's case, band members crack jokes about it on their web site. They say security officials are just jealous because the punk rockers get more women in bed than the officials do.
The Cuban-American National Foundation has offered to pay for a lawyer for Gorki, which one dissident leader said would be the kiss of death for him - at least in Cuba. And such anti-Castro politicians as Ileana Ros-Lehtinen in Florida have condemned Gorki's arrest and urged the international community to take action.
Posted by alongthemalecon at 2:42:00 PM