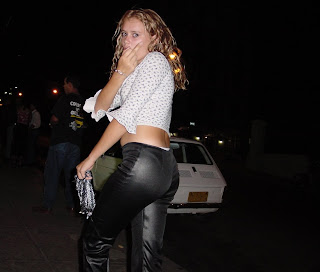 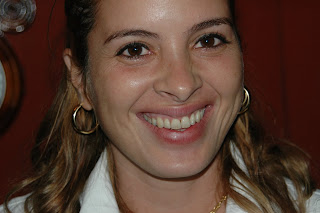 I find Cubans to be incredibly patient when dealing with photographers, tourists and anyone else with a camera. Kids yell out:

It helps that Cubans are so photogenic. It must be the mix of races - black, white, mulatto, etc.
They have striking features, like this hostess in the cigar room at the Hotel Nacional.
But while working in Cuba last month, several people on the streets asked for money in exchange for any photographs. I'm not talking about the women and men who pose for tourists near the Bodeguita del Medio and other old Ernest Hemingway watering holes. They've always demanded money. But I had ordinary people ask for money blocks or miles from the tourist zones. One young guy tried to elbow me in the stomach when I ignored his demand that I take his picture. I had the feeling he was asking for his picture to be taken so he could demand money. But who knows? While this was going on, the guy's friend was behind me, trying to get into my backpack.
I'm surprised Cubans don't show more resentment or hostility toward foreigners, especially Americans. I think the Cuban government ought to get some credit for that. Cuban officials regularly criticize the U.S. government, blaming the trade ban for many of Cuba's economic troubles. But Cuban officials have always made it clear that their beef is with the American government, not the American people. And that attitude has sunk in.
Most Cubans welcome American tourists with smiles and open arms. I haven't seen hostility or resentment toward Americans in Cuba.
I was a little taken aback when one particular Cuban woman, above in the tight black pants, got mad after I took her picture outside a nightclub. Her reaction was immediate as she flashed a sign recognized around the world.
Posted by alongthemalecon at 7:10:00 AM

I'm enjoying the blog. The everyday anecdotes are very interesting.

Thanks for adding me on your blogroll, really I'm humbled. And, the good news is that I will be posting new stuff very soon.

And thanks for blogging.

Thank you! I enjoy your blog, too.
I have tons of anecdotes about Cuba, along with thousands and thousands of pictures taken over the past 14 years, but all the stuff is just sitting around. So I'd like to try and do something with it. I have lots of fresh material, too, from a recent trip to the island, and I want to somehow publish that.
Thanks again, Tracey

Flickr is a good way to get the photos organized and out... I can look at pictures of Cuba all day.