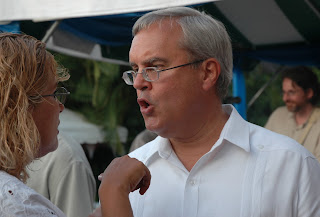 Henry Kissinger once gave a watch to a Cuban double agent thinking he was spying for the Americans, according to an old KGB hand who helped train the Cubans.
Cuban Colada found that interesting tidbit in the Moscow Times, which published an interview with Oleg Maximovich Nechiporenk today.
Cubans are experts in the art of espionage. While in Cuba a few years ago, I arranged to see James Cason, then head of the U.S. Interests Section in Havana. I'm pretty sure that only Cason, shown above, and his secretary or one of the press attaches knew about the interview. Then, on the day it was to take place, a Cuban official I knew casually asked, "Hey, when you see Cason later today, why don't you ask him about such-and-such." I don't remember exactly what the Cubans were interested in knowing. But I was impressed they knew about the interview in advance.
Posted by alongthemalecon at 7:30:00 AM