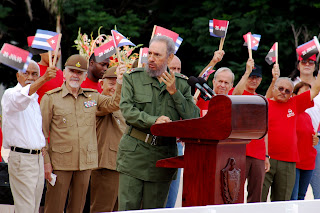 It's been more than two years now since I shot this photograph of Fidel Castro during one of his last public appearances on July 26, 2006.
I returned to Cuba last month and saw his brother Raul speak in Santiago de Cuba. Last week, I wrote a story about the trip for the Houston Chronicle. It can be found here.
The story is pegged to Fidel Castro's 82nd birthday, to be celebrated by some and lamented by others, on Wednesday Aug. 13.
Of course, some scholars believe Castro is actually 81 years old, not 82. Brian Latell, a former top Cuba analyst for the CIA, explains the theory in After Fidel, his 2005 Raul Castro biography. A brief explanation can be found here.
Posted by alongthemalecon at 6:42:00 PM