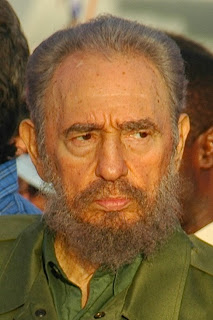 No official birthday bashes were planned for Fidel Castro's birthday today, according to the Associated Press. Reaction to Castro's birthday was mixed in the blogosphere. Some praised Castro, as noted in this message of support. Venezuelan President Hugo Chavez sent Fidel a present - a portrait of Simon Bolivar. Others marked the occasion with criticisms of Cuba's human rights record. Then there was this from a blogger named green seahorse:

happy birthday fidel castro! i hope you have a lovely day and that you get to eat a big ice cream sundae. 18 scoops.

Why 18 scoops, I have no idea.
I shot this photo of Castro, above, before he spoke on July 26, 2006 - the last day he appeared in public. He was not showing any obvious signs of illness then, yet a short while later -- on July 31, I believe - he would be rushed in for emergency surgery.