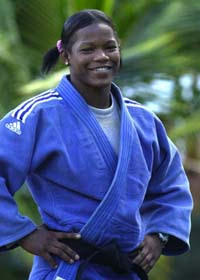 I'm sure Cubans are celebrating their country's first medal - a silver. Yanet Bermoy, 21, pictured at left in this Granma photo, placed second in a judo competition - the 48-kilogram weight class. Her profile is here.

While living in Cuba, I got to know another judo champion, Jorge Fis. He won Cuba's national judo championship 17 times, but never won Olympic gold because of the U.S. and Soviet Olympic boycotts of the 1980s.

Jorge worked as a bouncer at a disco in the 1990s. I used to pick him up 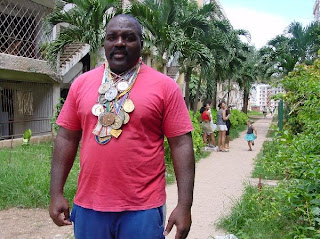 when I saw him hitchhiking on the road from Tarara, where I lived, to Havana. He was so big he barely fit in the front seat of my Jeep Cherokee. He's pictured above outside his apartment in Alamar, east of Havana. He's wearing a small sample of his dozens of medals, which his mother pulled from a tangle of medals he had in a cardboard box.

I met quite a few athletes while in Cuba, including Olympic medalists and other sports celebrities. I was surprised at how easy it was to find and interview them. They aren't surrounded by assistants and public relations people and so it's quite easy to reach them. Without fail, they were generous with their time. A number of players for Cuba's longtime top baseball team - the Industriales - invited me into their homes. These included Antonio Skul, below. 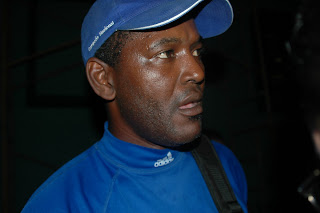