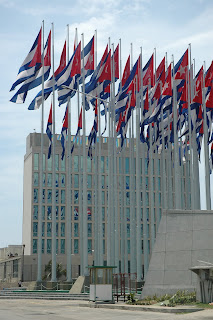 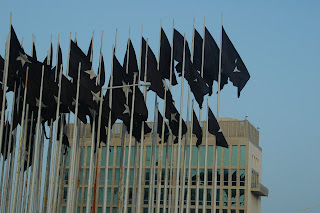 In January 2006, the U.S. installed the huge crawling message board outside the upper edge of its Interests Section in Havana. The board showed everything from baseball scores to quotes from famous people talking about democracy and passages from the Universal Declaration of Human Rights. Fidel Castro called it a gross provocation and said a bunch of "bandits" were running the U.S. government. And then workers installed huge flagpoles and raised black flags to block the messages from view. And it pretty much worked. It's hard to see the messages unless you walk right up to the Interests Section.
In July, workers lowered the black flags temporarily and replaced them with red, white and blue. These were Cuban national flags and they marked the country's July 26 festivities marking the start of the revolution in 1953.
Posted by alongthemalecon at 9:05:00 AM

When I was in Cuba last they had some idiotic stuff scrolling up there. A Cuban I was with said that most people laugh at the sign and see it as an insult. That people in the US Government think Cubans are so stupid as to beleive or buy into the blatant propoganda they put up there. I have heard that they smartly changed the more provacative postings and now just post news headlines. Still, despite the Cuban press deficiencies, there are not many news items that the average Cuban does not know a heck of a lot about. This idea that Cubans don't know what is going on in the world is just complete nonsense.