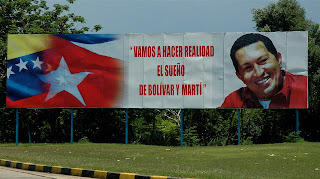 How would it feel to be cruising down Interstate 95 in Florida and all the sudden there's a huge billboard of, say, Gordon Brown, prime minister of England? (shown in this ABC photograph).

Well, travel to Cuba and you'll see billboards of Venezuelan President Hugo Chavez on the roadside. I even saw Hugo Chavez portraits in some homes during my last visit to Cuba.
Chavez and his economic support - particularly millions of barrels of subsidized oil - are vital to the Cuban economy. But I know some Cubans who resent Chavez and the perception that he has as much influence as some Cuban leaders.
Posted by alongthemalecon at 7:18:00 AM

I know some Cubans who resent Chavez and the perception that he has as much influence as some Cuban leaders.

I don't think Chavez is the one doing the influencing in that relationship. Chavez has said he almost looks to Fidel like a father. I can't think of many times when Cuba has been influenced by anyone in fact.

The danger I have heard expressed is that Cuba is not planning adequately for the day when an anti-Cuba Government is back in power in Venezuela. But Cuba is probably not alone in that regard. Many countries are benefitting from preferential financing terms on Venezuelan oil and the ability to barter.

What you say makes sense in every respect. I don't think Chavez is doing the influencing in the relationship, either. I wasn't clear in what I was trying to say.
I believe the relationship with Venezuela changed Cuba's direction and not all Cubans are happy with that, although I'm sure many appreciate that there are fewer blackouts and that oil prices are stable (the price of a liter of gasoline in Cuba has been the same for at least two years).
In the mid-90s, the Cuban government began relying more than ever on international tourism and foreign investment to bolster the economy. But a decade later, I'm not convinced that international tourism carries the same importance, judging from the deteriorating conditions of many hotels and tourist facilities.
The community where I lived in Cuba - once aimed at attracting mainstream foreign tourists - shifted abruptly to medical tourism. And many of the Cuban government's foreign investment partnerships have ended. I'm not so sure all this would have happened without the influx of oil and money from Venezuela.
One reason some Cubans resent the close relationship with Venezuela is that they want change. They want fewer government controls over the economy. And that's not the direction Hugo Chavez wants to take Venezuela.
I'm not criticizing Cuba's approach. I think Cuban officials are doing what they feel they need to do to survive and maintain independence even as the United States tries to undermine the government.