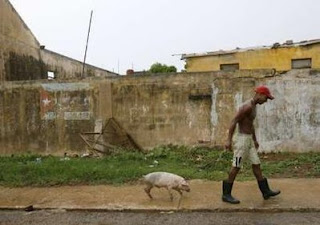 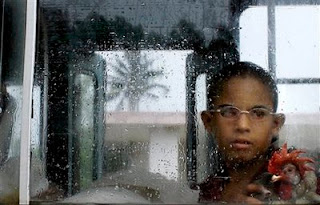 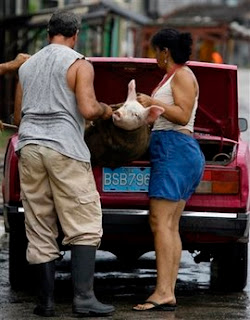 More than 240,000 people have fled Hurricane Gustav at this hour. The Category 4 storm is about to hit the mainland, the Associated Press said. AP photos are above.
Update: The hurricane hit with 150-mile-per-hour winds, Reuters said.
Update 1: There was widespread damage, many injuries and gusts above 200 mph, reports say.
From the Sun-Sentinel:

Cuba awoke Sunday to widespread damage and flooding in the wake of one
of the most powerful hurricanes to hit the island in more than 60 years
-- Telephone lines and communication towers knocked to the ground. Roads
washed out. Cisterns and tin roofs ripped from buildings. Massive trees
uprooted.
Storm surge pushed seawater inland more than two miles, according to
official Cuban media reports, and Hurricane Gustav's 150 mph sustained
winds caused untold damage to the tobacco-growing regions agriculture.

My friends there said they made out OK. I'm glad they did.

Glad to hear it.