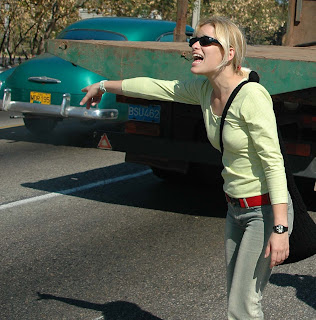 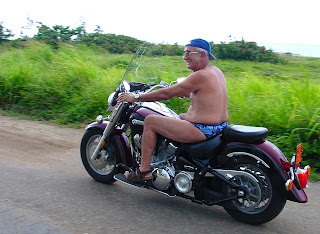 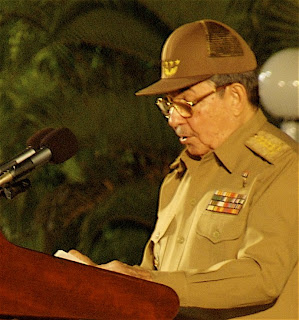 It's amazing how many Cubans rely on the kindness of strangers to get to and from work.
When I lived on the island, some government vehicles were required to stop and pick up hitchhikers when they had room for passengers. But many drivers picked up hitchhikers voluntarily.
This willingness to pitch in and help your fellow man - or woman - has long been part of the glue that holds the Cuban revolution together.
And indeed you can find a lot of Cubans who help out without asking for anything in return. A Cuban friend of mine named Pedro used to help me keep my Jeep and motorcycle running. He'd have grease up to his elbows, on his neck and on his face by the time he was finished making repairs. He worked his tail off. And he never asked for a thing in return.
Pedro, shown above testing my motorcycle, graciously accept a cold Bucanero beer, sure, but it was hard to convince him to take anything else.
I think it's easier for Cubans to be unselfish when everyone feels like they're in the revolution together. Sure, people are poor, but most everyone is poor. You don't see great inequalities. And indeed, Cuban authorities at times have discouraged people from getting rich, particularly if they thought they were making money on the black market.
But President Raul Castro, 77, has signaled that it's OK for some people to have more than others as long as they work for it.

Socialism means...equality of rights, of opportunities, not of income, he said in July. Equality is not egalitarianism.

It will be interesting to see if any Cubans quit their unselfish ways when they see their neighbors getting rich.
Posted by alongthemalecon at 5:16:00 PM