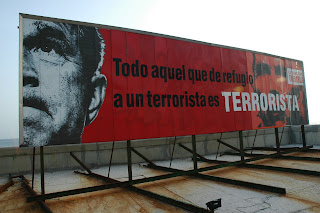 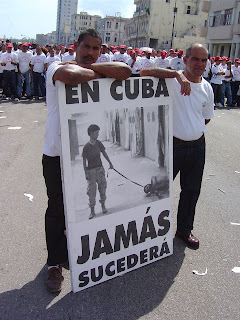 Former CIA operative Luis Posada Carriles will stand trial on immigration charges in the United States, the LA Times reported on Thursday. The U.S. government's handling of the Posada Carriles' case has given Cuba plenty of fuel for its propaganda machine over the years. We spend tens of millions of dollars trying to influence what's going on in Cuba. But Cuba, at times, doesn't need to spend a penny. The socialist government just points out a bone-headed move the Americans have made and - poof! - instant propaganda for the Cuban masses. No need to spend tons of money coming up with a slick campaign - just gather the facts, lay it out for the audience in Havana and repeat it a few thousand times.
And of course, Cuba doesn't have to limit itself to U.S. policy toward Cuba. It can also crank out the propaganda to capitalize on other mistakes we make, citing, for instance, U.S. treatment of detainees taken in the war on terrorism.
Someone - I think it was Richard Nuccio, Clinton's Cuba advisor in the mid-90s - once told me he compared the U.S.-Cuba fight to a chess game. The Cubans, and particularly Fidel Castro, he said, studied the board all the time, 24 hours a day. But his U.S. counterparts spent most of their time at a party in an adjoining room, coming back to quickly move a chess piece without really studying the board, then rushing back to the party.
As a result, the U.S. sometimes takes positions on Cuba that are difficult to defend, making it simple, cheap and effective for the Cuban government to convince its people that the American government policy on Cuba is flawed.
The LA Times story recalls that Posada Carriles told his handlers he was targeting a Cuban airline and there is no indication the U.S. did anything to try to stop it. Says the newspaper:

Posada's communications with the spy agency -- disclosed in declassified documents obtained by the National Security Archive at George Washington University -- show that he told his handlers in Washington of plans to "hit" a Cuban airliner days before the Oct. 6, 1976, explosion.

Such revelations give Cuba ample material for billboards that are plastered all over the island, such as one of George Bush along the Malecon.
Posted by alongthemalecon at 8:19:00 AM

You are acting like this is just US bonheadedness Tracy. We know Carrilles was a US spy who made his living from US taxpayers plotting and carrying out illegal violent acts (terrorism) abroad. Not just in Cuba...

Cubans see this history, see the support he still receives in Miami and see the ridiculous ways the US Justice system has handled his case and don't think about the US government being incompetent. They think of it as protecting their murderer who did their dirty work and who now must be protected. I mean, did you see the latest way he got off charges? The BS charge of Government misconduct and "trickery" because of a supposedly poor translation. I mean, Posada Carriles and his lawyers were fully bilingual!! The decision casts him as an anti-Castro hero and the only menion of terrorism is condemning the prosecution for "fishing." It really is ridiculous and can really only be explained one way. The US was smart to put him up on immigration charges. It gave the appearance of doing something but actually was a giant fraud. Same witht he most recent ruling - just another way to prevent a lawful extradition order.

I see your point.