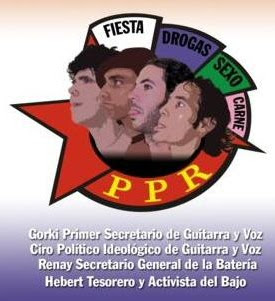 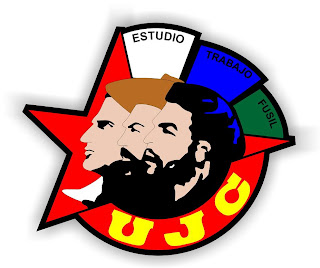 It's a spoof of the Young Communist Union's logo, which says the revolutionary's life should be centered around three things: Study, Work, Rifle (Estudio, Trabajo, Fusil).

The Young Communist Union logo show revolutionary leaders Camilo Cienfuegos, Che Guevara and Julio Antonio Mella. The punk rockers, whose profanity-laced songs have become popular among some young people in Cuba, inserted their faces instead in a logo that must infuriate some of Cuba's socialist leaders.
Posted by alongthemalecon at 3:50:00 PM