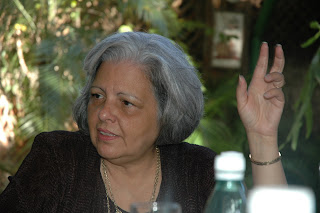 Martha Beatriz Roque, shown in a photo I took while at lunch with her, is taking on the Cuban government once again with her lawsuit against authorities for making public evidence that security agents gathered against her.
State-run television and newspapers in May presented e-mails, videos, audio, letters and photos that it said prove that former U.S. Interests Section chief Michael Parmly personally delivered funds to Roque. She is accused of keeping some of the money and passing the rest along to other dissidents. Granma sums up the case in English here.
Roque has declined to comment on whether she took money from Parmly and has claimed that at least some of the evidence was taken out of context or fabricated, according to the Associated Press. In any case, Roque told reporters in Havana, Cuban law does not allow the government to go public with information it gathers during its investigations.
I'm not expert on Cuban law, but I would be surprised if the dissident leader's lawsuit brings any results. People loyal to the socialist government control the courts. How could they possibly rule in her favor?
What also hurts Roque is that she allegedly has ties with people who want to topple the Cuban government.
If Cuban authorities are right, some of the money for Roque was funneled through a nonprofit called Fundación Rescate Jurídico. Guidestar records show its head is Santiago Alvarez Fernández Magriñat and lists this address:

Alvarez has been accused and convicted in a number of plots against the Cuban government. In one case, he was caught on tape telling an underling what cans of explosives would do to the famed Tropicana nightclub in Havana.

Two little cans and the thing is gone.

You can be sure that Cuban security agents are going to investigate any new plots by Alvarez. His criminal past makes it a matter of national security for Cuba. And I wouldn't be surprised if there weren't some provision in Cuban law for making some aspects of investigations public. I'm not passing judgment. But Cuba is a country of laws in many respects. The laws aren't always enforced, but there are plenty of regulations on the books. And many of the regulations are vague enough to be used and adapted to new and changing circumstances.
Posted by alongthemalecon at 6:22:00 AM