Where Raul Castro will be buried 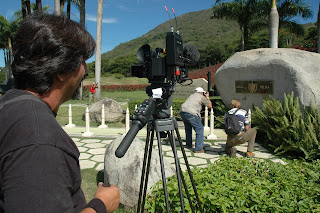 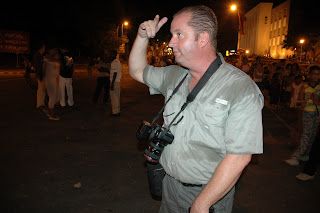 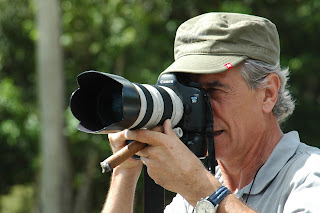 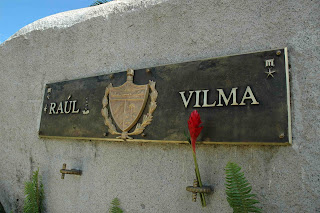 In case you're just dying to know where Raul Castro will be buried someday, here's the spot: Inside a large rock meant to symbolize the strength of the Cuban revolution.
Already inside the boulder are the remains of Raul Castro's wife, Vilma Espin.
Espin, former head of the Federation of Cuban Women, died in June 2007. The rock containing her remains is located at the Frank Pais Second Eastern Front Mausoleum, about an hour's ride from Santiago de Cuba.
Photojournalists, above, take pictures of the site in July 2008.
I traveled to the mausoleum with a group of Cuban and foreign reporters and photographers. Among them was French photographer Jose Goitia, former photographer for the Associated Press in Havana.
Goitia, pictured above wearing the green cap, continued working in Havana after leaving the AP and I am convinced he has one of the best collections of news photos of Cuba anywhere. Two web sites displaying his work are here and here. He has an outstanding collection of photographs despite the fact that he lost some 9,000 negatives in a fire at the AP office at the Lonja de Comercio building in 2000. He is a helluva photographer who almost always manages to get to the right spot at the right time.
Speaking of photographers: While in Cuba, I also ran into Rob O'Neal, a photographer who works for the Key West Citizen. We spent one evening shooting pictures at the carnival in Santiago de Cuba and he was incredibly patient as I quizzed him on the intricacies of night and flash photography. I was humbled as I looked at the sharp, well-lit images in on the LCD screen of his Canon camera. Rob also writes - here is a recent column he wrote about his 19th trip to Cuba.
Posted by alongthemalecon at 7:48:00 AM