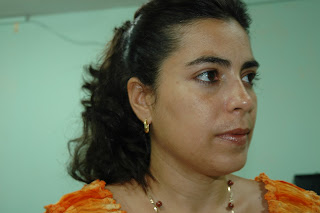 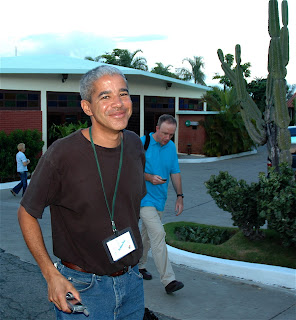 This is the first part of an interview that New York Times reporter Marc Lacey and I did with Adriana Perez, wife of Gerardo Hernandez, one of the five Cuban agents held in U.S. jails. The interview took place in Santiago de Cuba. Marc and Adriana are shown in the photos above. As I have time, I'll try to post more Q&As from the case of the Cuban Five.

Adriana: They have all been prisoners for 10 years, since ’98, September 12 of ‘98. His sentence was two life terms plus 15 years.
Condemned for life, as they say.

Q - And what is your hope now, after the decision of the court?

Adriana: From the legal point of view, we have solid arguments that could support the defense that has been prepared.
But we have not stopped recognizing that this is a political case and as such has been subjected to a series of manipulations and violations during the process, which has made it more difficult to find the truth and reach to a fair decision, precisely because everything takes place in an election season environment, a hostile environment toward Cuba and that is why we also
we know that the decisions made in the case will be influenced by U.S. politics.
We have not given up hope that our public campaign and international public opinion may exert some influence in the
court and the decisions of judges.
We have no other choice but to continue presenting our legal arguments and to continue airing our arguments from a political viewpoint. The international campaign takes time precisely because there has been silence in the press.

Q – From a personal level, tell me about the process of trying to visit your husband.

Adriana: It has been a very wearing and very difficult process to endure. We (Adriana Perez and Olga Salanueva) have gone 10 years without seeing them. All we’ve asked for is our right to make visits. Olga and I are being prevented from exercising that right because we are considered a danger to American security. This is something we call ridiculous – that we could possibly be aggressors against this government or have intentions to harm U.S. national security.
It would be impossible for us to try to do something against this country (the U.S.) when really our husbands were defending the rights of Americans. All we want is to visit them in jail.

The US literally has to say to these women (the wives of the Cuban 5) with a straight face that they are being denied visiting their husbands because of national security concerns. Absurd and sickening. The right to visit family in prison is an internationally recognized human right.