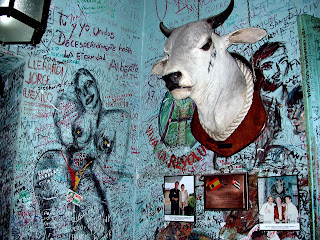 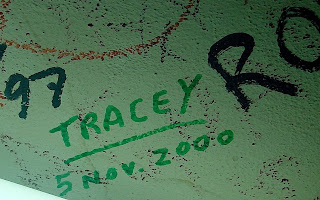 Yahoo! Travel calls Havana's Bodeguita del Medio "one of the most famous Cuban restaurants in the world."

In this tiny space, with hardly enough room to move, the walls are covered with the signatures of luminaries like Nat King Cole, Brigitte Bardot and Errol Flynn, followed by Julio Cortázar, Joan Manuel Serrat and Jack Lemmon, just to name a few.

To be sure, la Bodeguita is a piece of history and entrepreneurs are eager to cash in on its name. The family that founded the restaurant in Cuba moved to Miami after the 1959 revolution. When I interviewed the family for a story in 2003, Meri Martinez told me the Bodeguita name rightfully belongs to her family. And as you'd expect, her restaurant in Miami is called the Bodeguita del Medio.
“If you come into this restaurant, there’s one requirement," Martinez told me. "You’ve got to hate Fidel Castro.”
Employees of the Bodeguita del Medio in Havana shake their head at that kind of talk. They say what's done is done. Castro's rebels won and there's no turning back, they say.
Politics aside, the food at la Bodeguita in Havana isn't bad. Yahoo! Travel continues:

On the menu are such local delicacies as roast suckling pig, fried plantain, black-eyed beans, tamales and cassava in a special dressing. The house drink is the "Mojito," made with rum, soda, lemon juice and a sprig of mint; once the favorite tipple of Ernest Hemingway whenever he dropped by for culinary inspiration.

In case you're curious what the place looks like, here is a short video tour:
Posted by alongthemalecon at 9:52:00 PM

I had no idea it was such a small place. Lots of character and characters I'm sure. Is it safe to leave there after having a few (too many)?

Seems like a lot of jineteros hanging out just waiting for tourists to come out of there.

The video clips show just the bar. If you go down a hallway to the left, you reach the restaurant portion of the place. I don't know how many tables there are - 15 or 20 downstairs, I guess. When I was there, there were more tables on the second floor and another bar. So la Bodeguita is bigger than the videos show.
As for the jineteros, I used to walk around at all hours - 2, 3, 4 a.m. - and never had any trouble. But this last time I went back to Cuba, some people on the streets were more aggressive than I've seen. I was hassled on the streets at one point by two guys who seemed to want to steal my camera and backpack. And I had some things taken from my hotel - a cell phone and a jump drive.
I think some people are losing their fear when it comes to confronting tourists and other foreigners. In the '90s, the government message was basically, treat these tourists right because this is an important source of money for Cuba. But now, I'm not sure that message is as loud and clear - or if all young people are listening.

95% of the "hustling" of tourists in Cuba has to do with tying to get them to a paladar (restaurant), giving them a tour or getting them to buy some cigars. But it is all done with remarkable friendliness. And many, if not most, of the people who stopped me and my wife on the streets in Havana just wanted to talk to foreigners - and would not accept a dime if you gave it to them. We did buy a few drinks for folks. One young couple invited us to dinner, which was a wonderful experience. Another game us his number if we wanted to go dancing at some "real" places. We made friends all over.

You forgot to mention that the Cuban government has wisely marketed La Bodeguita abroad. There are franchises that have opened in several large cities in Mexico, Latin America and Europe. I have visited several and they are pretty neat tourist traps, I have to admit.

I agree that the "hustling" of tourists is done with remarkable friendliness in Cuba. You meet a lot of sincere people who aren't after your wallet and just want to make friends or hear what's going on in the U.S.
The depth of Cuban friendliness is difficult to appreciate unless you experience it yourself. Cuba is like no other place I know.

Good point about the franchises. Back when I wrote about the Bodeguita, Gran Caribe had sold franchises on three continents and you could find Bodeguita restaurants in Mexico, Italy, France, the Czech Republic and other countries.
I went a few times to one of the Bodeguitas in Mexico City - the one at Cozumel 37, Colonia Roma Norte - and it was pretty good. At least one Cuban employee from the Bodeguita in Old Havana worked there and was trying to make sure the place was as authentic as possible.

And then you have the bootleg version's like the Bodeguita de Pico that opened in my neighborhood a year or so ago. I think they claim some relation to a relative of the original owner in Havana. But I am sure they would be disappointed with the food there though...

Delighted to hear that Cubans are treating their exploiters (I mean, "guests") with the courtesy that they deserve. One day, no doubt, many of them will be put up at government expense in historic venues which have hitherto been reserved for Cubans.