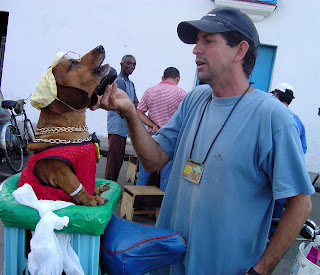 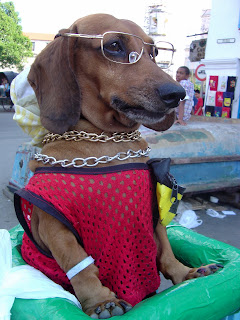 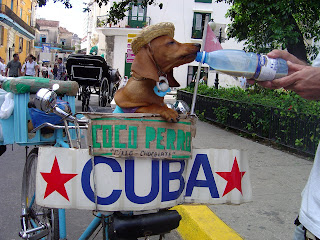 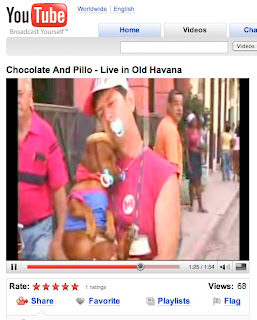 If you've been to Old Havana, you've probably seen dogs wearing funny hats and costumes, usually aimed at shaking loose tips from passing tourists.
Some dog owners demand a Cuban peso for every picture taken of their pooches. But one man actually gives tourists a show for their money.
Roberto Gonzalez, the owner of a dachshund named Pillo Chocolate, has taught his dog to talk on the phone, bark at President Bush and shoot a gun. See YouTube video (mostly in English) and this profile, which describes the dog as a sports fanatic who likes riding on motorcycles and has been photographed 80,000 times (in Spanish).
Pillo Chocolate knew how to distinguish Cuban pesos and American dollars when I saw him a few years ago.
The trick went like this:
Gonzalez showed Pillo Chocolate a Cuban peso. We're not talking about convertible pesos, which are now worth more than U.S. dollars, but regular Cuban pesos, worth less than a nickel each.
Seeing the near-worthless currency, Pillo Chocolate growled, barked and even snapped at my fingers when I held a Cuban peso.
Gonzalez then asked me for a dollar and Pillo pawed it with approval, which of course was good for a tip.
When the Cuban government stopped allowing U.S. dollars to circulate freely on the streets in 2004, Gonzalez changed his trick.

"Before, Pillo would reject any currency that wasn't the dollar," Gonzalez told the Associated Press. "But in the last week I trained it to accept the convertible peso. It knows it has to adapt, too."

I haven't seen Pillo Chocolate for a while. He'd be about 11 if he's still around. Gonzalez also had a back-up dog - a younger dachshund named Coco Perro, who loved coconut milk.
Posted by alongthemalecon at 7:27:00 PM