James Cason: "Lots and lots" of Cuban spies "all over the place" 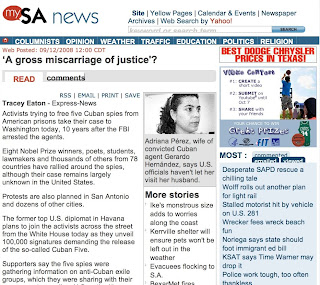 The San Antonio Express-News today published a story I wrote about protests to be held in Washington and other cities to demand the release of five Cuban spies, arrested when the FBI broke up a Florida-based spy ring 10 years ago.
Among those quoted: Three relatives of the Cuban five; Wayne Smith, James Cason, Ninoska Perez, Jorge Farragut, Walter Lippmann and others. I'll post more on the story and photos in the coming days.
Cason is the former chief of the U.S. Interests Section who went on to become a "singing sensation" in Paraguay. Who would have guessed? Anyway, in the story, he said he believes that Cuban espionage is likely pervasive in the United States.

Cuban spies should not be underestimated, said James Cason, who was chief of the U.S. Interests Section in Havana from 2002 to 2005.

“They have one of the better services in the world, and we're the only enemy from their perspective,” he said.

Cuban agents “are very good,” said Cason, the former U.S. ambassador to Paraguay and a career diplomat with more than 30 years' experience in Latin America.

“My guess is that there are lots and lots of them all over the place,” he said. “Who knows? We'd love to know where they all are.”

Stasi and KGB trained, you can bet Cuba's spies are the best there is.

Earlier this year I also wrote about the threat of Cuban spies, and in my research found that the threat is incredibly exaggerated by those who continue to support current US policy towards Cuba.

Last year, when Scott Carmichael (DIA counter-intelligence officer) toured his recent book about Ana Belen Montes, he made sure to tell everybody that Cuban intelligence agencies had the US "thoroughly wired."

In my opinion, the threats are greatly exaggerated. If you look at the cases that have been discovered they point to focused activity, or just paranoia.

Belen Montes, the exception, was the result of US aggression in Central America during the '80s, which later manifested into serving Cuba.

The rest of the cases belong to local exile politics in Miami. Look at the timeline. It was as far back as 1995 that the Cuban government was suspecting new terrorist attacks against Cuba from Florida.

During this period we saw the new cases of Cuban espionage, namely the Cuban Five and Juan Pablo Roque.

But, all this does not tell us that the extent of Cuban espionage is dire. Only those who believe that Communism is a force of pure evil would conclude this.

If you look at the history of intelligence services of the world, you will find that they are an increasingly unaccountable bureaucracy that depends on exaggerated foreign threats.

Ever since its creation its been that way, and billions of dollars later it continues with increasing ineptitude.

Thanks. I find all this spy vs. spy stuff fascinating and am trying to learn more about it. I'll check out Melvin Goodman.