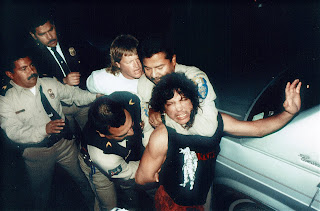 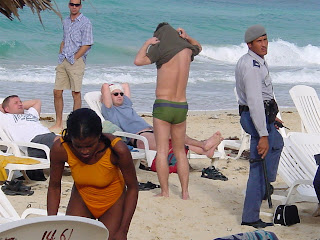 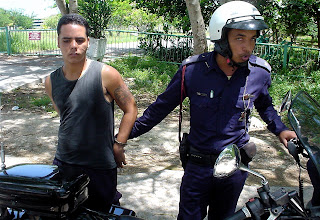 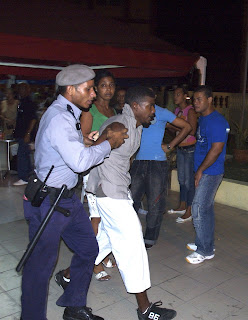 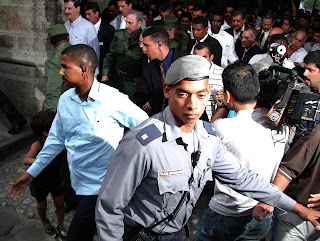 Corruption has plagued Mexican police agencies for decades. Many officers work for drug traffickers, who are now so powerful they threaten the fabric of Mexican society, according to this Jane Bussey story.
Violence abounds. In the turf war over drugs, 24 bodies were found dumped last week at a national park near Mexico City.
Americans have also been victims. Six Mexican police officers are under house arrest for allegedly beating an American to death in August, this report says.
Mexicans have taken to the streets and marched against the violence. But some segments of society accept and encourage the drug business, which is immensely profitable thanks to America's huge appetite for drugs.
One notorious trafficker, Miguel Felix Gallardo, implicated in the killing of DEA special agent Enrique "Kiki" Camarena, even has his own web site.
I've interviewed many Mexican officers over the years and have seen them in action (Tijuana officers, above, arrest a tourist).
While living in Mexico City from 1993 to 2000, I saw police officers routinely hiding out near poorly marked intersections and nabbing just about every motorist who passed through. Motorists paid the cops bribes of $4 to $10 - and sometimes more - to go about their business.
I moved Cuba in 2000 and found a much different situation. Traffic police stopped me frequently to check my documents, but no one ever asked for money. One day I was stopped for speeding and managed to talk my way out of a ticket. Grateful, I held out a few dollars to the officer and asked if he wanted to buy a cold drink. It was a hot day. He was sweating and looked thirsty. But he wouldn't take the money.
I often saw motorists along the road arguing with police over traffic fines. Motorists screamed and ranted - I've been guilty of that, too - as the officers stood patiently, showing amazing civility.
I found most Cuban police officers to be well trained, disciplined and even innocent when compared to their Mexican counterparts.
Cuban cops I met on the streets weren't out looking for money. They were usually friendly, even talkative.
Traffic cops along the Via Blanca east of Tarara flagged me down a few times because they wanted to get a closer look at my 1600cc motorcycle, a rarity in Cuba. I let one officer ride it. He took off and a fellow officer joked, "He's on his way to Santiago de Cuba. You'll never see your motorcycle again." But I trusted the officer and, of course, he brought back the bike.
I have butted heads with Cuban police over photographs. After taking one innocent picture at the beach, above, an officer was furious, telling me it was illegal to photograph police officers in Cuba. He demanded I turn over the camera. I refused and told him I wasn't taking his picture - he just happened to be in the frame. And that was true. I didn't intend to take his picture. The officer finally dropped the issue.
On another day, I took a picture of an officer arresting a man who had been accused of stealing someone's belongings at a beach east of Havana. The officer, shown above, was so busy arresting the suspect, he may not have noticed I was snapping away.
More recently, I took a photo of a police officer hauling a man away after a fight at a cafeteria. An officer screamed at me for taking that picture, which, as it turned out, was not terribly dramatic and not worth the fuss.
Also shown above:
Police officers and others handle crowd control in Old Havana as Fidel Castro showed around Vicente Fox during the Mexican president's 2002 visit.
Posted by alongthemalecon at 11:42:00 PM