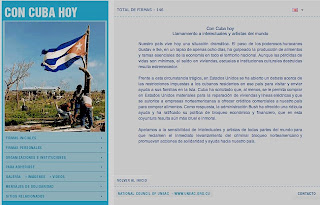 Silvio Rodríguez, Pablo Milanés, Miguel Barnet, Chucho Valdés, Marta Rojas and dozens of other Cuban writers, musicians and poets issued a statement, below, appealing for aid to repair damage from the hurricanes.

Our country is facing a dramatic situation. We have suffered the wrath of two powerful hurricanes, Gustav and Ike, in just eight days. These natural disasters have seriously affected food production and essential sectors of the economy throughout the country. Although very few human lives were lost, a massive amount of houses, schools and cultural institutions were damaged or completely destroyed.

In view of this tragedy, a debate about the restrictions imposed by the US on Cuban residents to visit and send supplies and money to their families in Cuba has begun. Cuba has requested authorization to buy materials from the US to repair homes and power lines. In addition, Cuba has requested that US companies receive authorization to extend commercial credits to the island to buy food. The Bush Administration’s reply has been a ridiculous offer of aid while ratifying their policy of political and economic blockade, even more cruel and immoral under the present circumstances.

We are sending an appeal to artists and intellectuals around the world to demand an immediate end to the criminal US blockade and to promote solidarity and support of our country.

Nearly 150 writers, intellectuals and artists have signed the statement so far, according to Con Cuba Hoy. Information is also available at the site of the Union of Writers and Artists of Cuba, or UNEAC  ,by its Spanish initials.
Meantime, the State Department has provided $100,000 to NGOs operating in Cuba and has authorized up to $250 million in agricultural sales to Cuba, according to a statement released today.
Posted by alongthemalecon at 2:55:00 PM

Thanks, Anton, I'll correct that