Cuban television on Hurricane Ike: It's a war 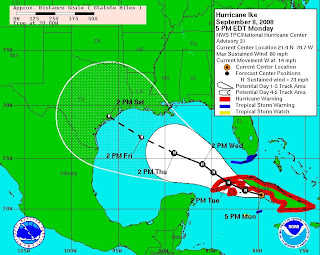 Cubavision reported at 5:40 p.m. that 20,000 homes were damaged or destroyed in Holguin province.
The Cubavision announcer described a scene of overwhelming devastation.
"It's a war," he said.
Downed cables and posts, along with thousands of trees, are strewn all along the highway from Banes to Holguin, a distance of about 48 miles, he said.
State-run Juventud Rebelde newspaper predicted the hurricane would intensify as it moved west.
Update: A friend in Havana sent me a message, calling the situation grim. "Super ugly," as she described it.
"This has affected almost all the provinces as far as houses, electrical system, phones and agriculture. I do not think that we recover soon."
Posted by alongthemalecon at 5:42:00 PM