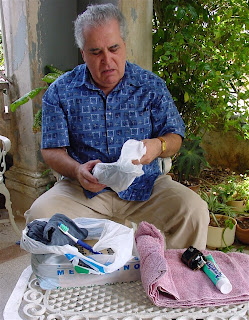 Elizardo Sánchez, who went from teaching Marxism to opposing it, once told me he's ready to go to prison at a moment's notice. I didn't realize he meant that literally until he reached for a plastic bag by his front door. It contained a towel, a toothbrush, soap, underwear, sandals and a fat book - all things he figured he'd need in prison.
Sánchez is the founder of the Cuban Commission for Human Rights and National Reconciliation, a group that the socialist government considers illegal.
He once taught Marxism at a Havana university, but later turned against the government and has spent decades pushing for change.
Cuban authorities have accused Sánchez of working with the U.S. government to undermine the socialist regime. The book, The Dissidents, describes how Cuban agents infiltrated dissident groups.
Posted by alongthemalecon at 6:23:00 PM

Cuban authorities have accused Sánchez of working with the U.S. government to undermine the socialist regime.

Is there really any dispute about this Tracey? This is a minor thing, but I have to say that it really grates me as an avid newspaper reader when journalists know something is true but since it concerns a certain Government, the sentence is worded to make it seem like another baseless accusation from those crazies. We heard it all the time before the Iraq war and it is part of the reason the American public bought the US line hook line and sinker. Anything contradicting that line was couched in "Baghdad says..." language.

As I have said before, Sanchez and others should be allowed to do everything they can to oppose the Government without resorting to working with the US and other hostile Governments. This is a red line that simply must be adhered to as long as the US maintains a regime change policy and a "plan for transition."