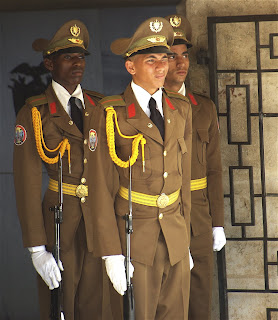 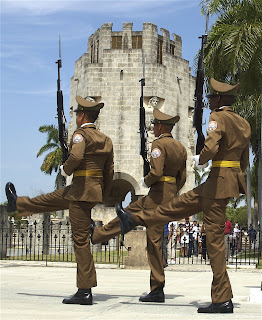 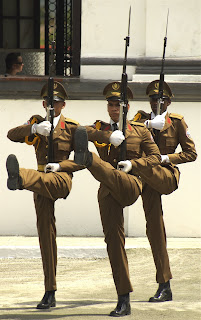 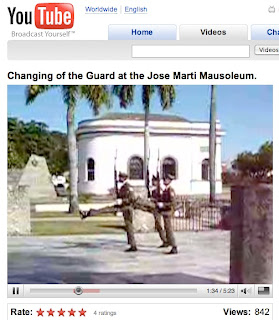 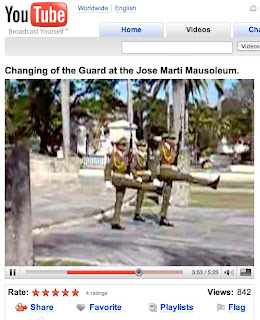 José Ramón Machado Ventura, vice president of Cuba, visited New York's Central Park over the weekend and placed a wreath beneath the statue of Cuban independence hero José Martí, Granma says.
José Martí is revered in Cuba, of course, and his remains are in Santiago de Cuba, the country's second-largest city.
Martí was killed in combat on May 19, 1885, and buried at Dos Rios. Since then, his remains have been moved at least five times. His remains were:

1. Exumed on May 22, 1885, and Martí was taken to a placed called Remanganaguas and reburied "only with his pants on," as a Cuban Foreign Ministry web site put it.
2. Dug up again and taken to Santiago de Cuba.
3. Exumed again in 1907 after the niches at the cemetery were destroyed. The remains were then placed inside a mahogany-encased lead cage.
4. Exumed once again in September 1947 and stored in a temporary tomb while a spiffy mausoleum was built.
5. Taken from the temporary tomb and placed into the Mausoleum of Santa Efigenia.

After all that indignity, José Martí can rest easy knowing that young Cuban recruits guarding his tomb do some of the best goose-stepping around.
That's right, Cubans don't do any old ordinary, run-of-the-mill goose-stepping. As one travel writer put it: The Cuban technique is "not the standard up-down goose step." Cubans, he wrote, lift their leg higher and hold it there longer.
Ouch.
Well, it looked painful when I saw three young recruits doing the goose step earlier this year outside Martí's tomb. But they looked proud of what they were doing. Click here for a 5-minute, 23-second YouTube video of the goose-steppers.
Naturally, we are taught that goose-stepping is evil. Says a blog called Contra Revolución:

Bad guys goose-step. It’s the international equivalent of a black hat in an old western. The good guys never goose-step.

Slate magazine called goose-stepping "the dance craze of tyrants." And George Orwell said it was "one of the most horrible sights in the world, far more terrifying than a dive-bomber."
Orwell wrote:

It is simply an affirmation of naked power; contained in it, quite consciously and intentionally, is the vision of a boot crashing down on a face. Its ugliness is part of its essence, for what it is saying is "Yes, I am ugly, and you daren't laugh at me." … Beyond a certain point, military display is only possible in countries where the common people dare not laugh at the army.

In any case, former Monty Python star John Cleese got plenty of laughs doing his goose step during an episode of Faulty Towers. It's called "the Germans."

The Cuban recruits I saw took their job very seriously, as you can imagine. But they've got competition. Don't John Cleese's steps look higher?
Posted by alongthemalecon at 7:29:00 AM