Espionage: Does Cuba have our number? (Updated) 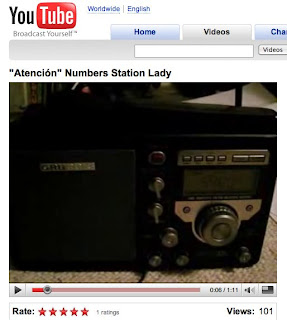 Supporters of five Cuban agents being held in American jails plan a sit-in outside the White House on Friday and a rally on Saturday. Participants are expected to include Wayne Smith, former chief of the U.S. Interests Section in Havana. This is happening now because Friday Sept. 12 marks the 10th anniversary of the FBI's dismantling of a Cuban espionage ring.
I am writing a story pegged off the 10-year anniversary and have been calling around to gather opinions. I spoke to Wayne Smith yesterday. Today I spoke to Ninoska Perez Castellon, a prominent Cuban-American leader shown in this YouTube video. And I've been digging into Google to look for recent stories about Cuban espionage in the United States.
I was looking at the Cuban Intelligence Research Center site and found an intriguing YouTube that features what is purported to be a Cuban "numbers stations." Put simply, it's a radio broadcast of a lady reading numbers. But what in the heck do all the numbers mean?
Update: I finished the story yesterday and it was published Sept. 12 in the San Antonio Express-News. The story is here.
Posted by alongthemalecon at 12:18:00 PM

I would hope that the passion many Americans have shown on this issue comes through your piece. I have been to meetings in Los Angeles with more than 100 people in attendence, solely to hear about this sad story of American injustice. When they have shown a movie about the Cuban 5, nearly every seat in the house was taken. I have been to protests where people who were told of the issue decided to help us protest right then and there.

Calling the Cuban 5 a "Cuban espionage ring" does the truth a great disservice. Absolutely ZERO evidence has been produced that they were doing anything but what they and the Cuban Govt. said they were - defending their homeland from US-based terrorism. They were forced to spy because the FBI would not do anything. When solid, actionable information was collected and passed to the FBI the FBI did nothing except arrest the Cuban 5.

These broadcasts has been around since the early 60's. As a ham radio operator and a DX'er myself I has been listenig to these broadcast for more that 40 years. Is nothing new.

DX'ers called this " Havana Moon" because was a lady making the broadcast always. They were very active in the war in Angola but always before and after Angola, the broadcasts never stopped.

Google "Havana Moon transmission" or "spy number stations " and also visit my web site here to read more about it:

Lionel,
Thanks for the information. I'll check out your web site. Best, Tracey

I forget to mention the information on my web site is in spanish....sorry.