"Evil God of Storms" to blame for Ike? 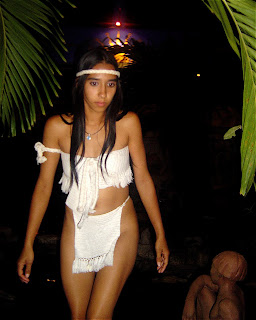 Hurricane Ike rumbled across territory that was once home to the Taíno Indians. As it turns out, the word "hurricane" can be traced to the Taíno.
It's unclear to me exactly how the Taíno used the word. Some say “Huracán” was the "evil god of storms." Others say it was the Taíno word for “storm” and that true god of storms wasn’t a god at all, but a goddess named “Guabancex," according to NationMaster.
Then I've read that the Taíno god came from the Mayan god Hurkan (meaning “one-legged”), "the mythological creator of the world, the animals, men, and fire," according to a South Florida Sun-Sentinel blog.
As far as the Taínos go, you may be interested to know that the Spaniards didn't completely wipe them out. Thousands of their descendants live on, many in the countryside of eastern Cuba, says the Onaway Trust and other groups interested in their preservation.
Some Cuban hotels celebrate the country's Taino heritage with dance shows featuring Cubans dressed like Taino Indians. The woman shown in the grainy photograph above took part in a performance at one hotel.
Posted by alongthemalecon at 10:46:00 AM

My name is Denise Colon. I am a student at Northeastern University. I am making a small movie about african influenced music and I was wondering if you could give me permission to use your image of the Taino woman in my movie. It will only be for educational purposes.

Yes, you can use it. Thanks for asking.
I'd love to see your movie once it's done.
FYI, I took the photo at a Cuban hotel. The woman dressed up as a Taino Indian as part of a show for tourists.