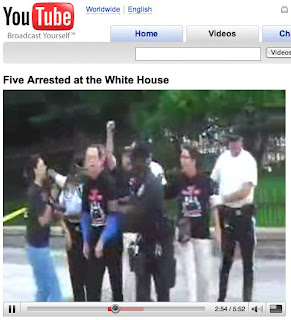 Police arrested five people Friday after they tried to deliver more than 100,000 petitions to President George Bush demanding that five Cuban spies be freed from American jails, a spokeswoman for the protesters said. (Video of arrest)

"They were attempting to deliver the petitions to the White House, 102,000 petitions from 78 countries," said Sarah Sloan, spokeswoman for the A.N.S.W.E.R. Coalition (Act Now to Stop War and End Racism).
"They brought them up to the gate and stated that they wanted to deliver them. The police set up what they called a police line. They put yellow police tape and strung it across the sidewalk in two places right in front of the White House."

Police then told the protesters not to cross the line, Sloan said.