Gustav tore up thousands of homes in Cuba 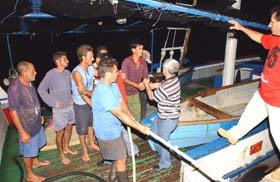 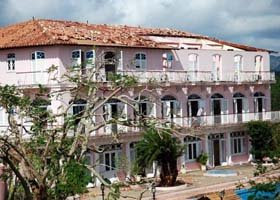 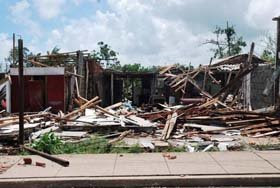 Gustav damaged or destroyed as many homes in Pinar del Rio as the previous 14 storms over the past eight years, Cuba's state-run Granma newspaper reports.
A group of five fishermen spent 27 hours hanging on to their boat before they were found and rescued, another Granma story says.
Marta Rojas, a longtime journalist and writer who lives in Havana, told me in a message this morning:

“Fishermen reported missing in the beginning had taken refuge in the Marshes of Zapata and were found alive by helicopter. There was devastation in Pinar del Rio and a large part of the Isle of Youth, but no deaths. Mobilization for shelters or high ground was very fast and effective.”

The photos above are from Granma. They show the fishermen; some of the damage at the Hotel Los Jazmines, known for its spectacular view of Viñales Valley; and a destroyed home in Pinar del Rio province.

According to a first-hand report sent to Karen Lee Wald from a friend in Cuba:

Isla de la Juventud: practically 100 % destroyed. Boats lifted from the sea and
parked in the middle of Nueva Gerona, buses twisted and lifted in the air, doors
and windows ripped off, banana plants of course ripped out, communications down
100 percent, and I have not yet seen any videos because I got my electricity
back just one hour ago, a flamboyan fell on the lines feeding just our house so
I have been without any electricity for 48 hours,but enough water, small radio,
gas to cook on and the most wonderful neighbors and solidarity that only people
who have lived in Cuba can understand.

Pinar del Rio: also very very bad situation, south coast had up to 7 km sea
inland, not a single life lost, not a single person wounded badly so you might
fear for his life, but very serious destruction in schools, tobacco drying
houses, communications and electric systems...

Ike is on the way

Geez, as if Gustav wasn't enough.