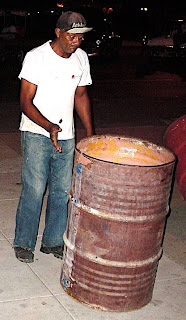 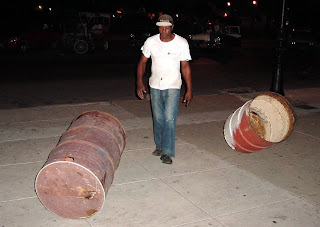 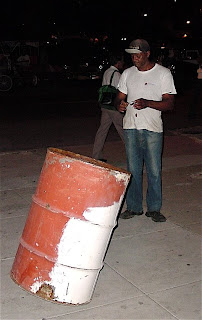 Well, I wrote about Luis Antonio Aguero, the man with the most face piercings in the world, so I guess I'd better give equal time to the Barrel Guy.
While hanging out in Havana one night, I came across a man who was spinning barrels in the street. He'd get two barrels spinning at once, barely touching them to keep them going. They'd just spin and spin as the curious gathered to watch this man.
The barrels spun perilously close to the ground, but rarely touched the sidewalk. Just when it seemed a barrel was going to crash down, the Barrel Guy would flick his wrist and get it going again.
I saw the Barrel Guy only twice. He'd work quietly, seeming to pay only casual attention to his barrels. Sometimes he'd stop to light a cigarette never letting a barrel fall on its side.
Or he'd fling the 55-gallon drum out in front of him and it would travel in a circle, then return to him.
I never got the man's name, but he was quite a character. Three short videos - lasting seven, five and 54 seconds, respectively - are below. In the bottom one, you can see a rare fumble by the Barrel Man. But never fear, he quickly recovers.
Posted by alongthemalecon at 7:24:00 PM