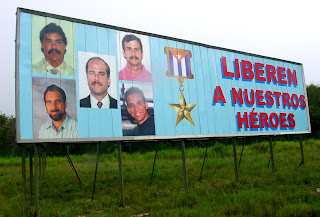 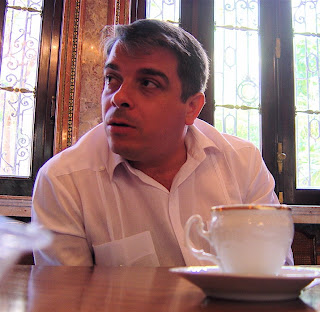 Cuban Vice President José Ramón Machado Ventura and Foreign Minister Felipe Pérez Roque, seen above during a meeting over coffee in Havana, plan to visit New York on Monday Sept. 22. They will press for the release of Cuban agents known as the Cuban Five, above, who were arrested 10 years ago and remain in American jails.
It's the highest-level Cuban delegation to visit New York since Fidel Castro's trip in 2000.
Fernando Remírez de Estenoz, head of international relations for the Communist Party of Cuba, will also be part of the Cuban delegation.
In 1998, Remírez attended a conference that the Dallas Morning News sponsored. I helped organize the conference along with several others, including Alfredo Corchado, now a Niemen scholar at Harvard University.
The conference was called Cuba in Evolution. It took place in Dallas and brought together top U.S. and Cuban diplomats together in a public forum for the first time in many years.
At the time, Remírez was chief of the Cuban Interests Section in Washington. His U.S. counterpart - Mike Kozak, chief of the U.S. Interests Section in Havana - also attended. He and Remírez sat next to each other and talked - something that doesn't seem to happen all that often with U.S. and Cuban diplomats.
I don't know that this kind of dialogue has taken place in the 10 years since then.
Just weeks before the conference, the FBI broke up a Cuban spy ring. The Cuban delegation traveling to New York is expected to call for the release of five agents arrested back then.
Update: Here's Machado's speech to the United Nations.
Posted by alongthemalecon at 6:39:00 PM

(WASHINGTON) – U.S. Rep. Ileana Ros-Lehtinen (R-FL), Ranking Republican on the House Foreign Affairs Committee, today commented on remarks delivered by the so-called Cuban Vice President José Ramón Machado Ventura during an appearance at a church in New York City. Machado, who received three standing ovations from the crowd before the start of his remarks, is in the U.S. for the annual opening of the United Nations General Assembly. Statement by Ros-Lehtinen:
While Cuban leaders pander to a small circle of apologists at the United Nations and elsewhere in New York, hundreds of political prisoners languish in deplorable conditions on the imprisoned island. Nothing has changed in Cuba, especially the hardship and suffering brought on by decades of disastrous policies and a brutal dictatorship.
The work of democratic activists laboring for change in Cuba is subverted by those in our country and foreign leaders who willfully ignore the depraved nature of the regime. The Cuban people deserve better.
By lashing out with falsehoods and baseless claims about American intentions in the region, the regime's rhetoric reflects the kind of anti-democratic thinking that passes for legitimate debate at the United Nations. Machado's criticism is meant to obscure the regime's dismal record on human rights and crippling economic failures.
Suggesting as he does that the regime wants to carry out in Latin America what it has already foisted on the Cuban people, Machado's solutions offer a grim future for a region whose people want free societies and leaders who are responsible and reform-minded.