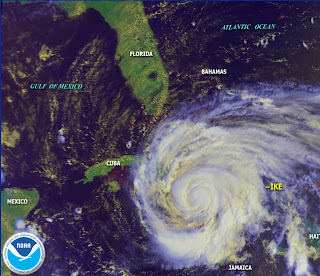 Pedro Corso Soto, 76, and Ángel Sánchez Cabello, 35. Both were residents of Rancho Veloz in Corralillo municipality, Villa Clara province. They were electrocuted while trying to remove an antenna from their roof.

Pascual Villafaña Rivera, 35, a resident of Camagüey. A tree fell on his house and a wall collapsed, killing Rivera

More than 1.2 million Cubans evacuated to escape the storm, according to the International Herald Tribune, which said Cuba had been "recognized by the United Nations as a model of sophisticated civil defense planning."
But no amount of planning can fully prepare for the wrath of Mother Nature. What a tragedy for Cuba, whose people had enough problems without this disaster.
I feel for the Cubans who have lost everything. Housing was scarce before this. Now it's only going to be worse as people crowd together.
Recovery will be difficult. In the United States, it's not such a big deal to replace a refrigerator, a mattress or a television. But in Cuba, it can take years to save enough money to buy even basic appliances.
Posted by alongthemalecon at 4:18:00 AM

But in Cuba, it can take years to save enough money to buy even basic appliances.

Cuba subsidizes energy efficient appliances and offers them to every Cuban with an affordable long term payment plan. More than a million TVs, 300,000 refrigerators, and more than a million electric stoves, pressure cookers and fans have been distributed in recent years by the Cuban Government for distribution.

Those are interesting details, thanks. I know Cubans who save for years to buy things for their homes, and others, of course, who choose the government loans for such things as refrigerators.
These loans take years to pay off. I recall hearing about 10-year loans for TVs or refrigerators - I can't remember the details. My point is that Americans can resolve some of these things so quickly and easily - go to Best Buy, plunk down a credit card, crisis over. It's not so simple in Cuba.