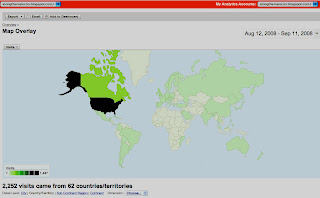 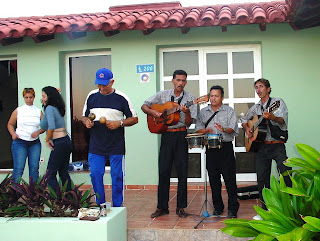 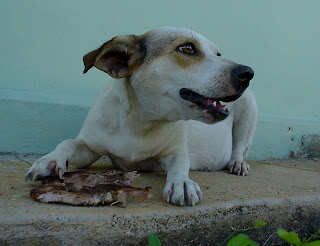 Along the Malecon is a month old and has gotten 2,252 visits from 469 cities in 62 countries. Visitors have come from as far as Barcelona and Budapest, and from Amsterdam and Kuala Lumpur.

This is a drop in the bucket, of course. I mean, aren’t there something like 30 billion web pages out there? And some 50 ka-zillion Internet users?

But even if Along the Malecon is a little mierdita in the grand scheme of things, exploring the blogosphere is an eye-opening experience. It’s not quite as satisfying as sipping an icy Bucanero from the hilltop cafeteria overlooking Guanabo. But it is interesting.

And Google Analytics is amazing. It tells me how many people visit Along the Malecon and where they’re from. And that’s how I know that someone dropped by from Maputo.

The word sounds like an insult. Or a type of bean. Or maybe a leafy plant.

OK, I know Maputo is in Mozambique, Africa. I mean, that’s what Google says and Google is God.

Thanks to all-knowing Google, I can blog, even though blogging is still uncharted territory for me. I’m sure at some point I’ll wind up like that dog in the New Yorker cartoon, you know, the one who tells the other dog, “Yeah, I used to have a blog. But then I went back to barking.”

But for now, I’m gonna stick with it.

My goal is to post original stories, interviews and photos from Cuba. I have material that’s just sitting around, so why not use it? I traveled to the island 29 times from 1994 to 2000. I lived there from 2000 to early 2005 and have returned twice.

Since Cuba has been off limits to Americans for almost five decades, I figure some people are interested in original photos and stories from the country.

This blog isn’t about politics. It’s not about condemning or embracing Cuba’s political system. But maybe I can help shed light on a place that’s sometimes misunderstood.

Now, some people say I’m the guy who misunderstands it. Fair enough. At least I’m not misunderestimating it.

To be sure, I have critics. They’re on the left and the right (and probably the center, too).

One Cubaphile has described me as a lazy, clueless, “bourgeois journalist.”

My extensive collection of ex-wives would quibble with claims that I am lazy since my passion for work – OK, I’m a damn workaholic – probably helped end our relationships.

Clueless? Yeah, guilty of that. But I am trainable and after many years I’ve come to appreciate the importance of lifting the toilet seat.

Bourgeois? More like a bourgeois wannabe, especially now that my bank account is empty and I no longer reside at my luxurious, scandalously turquoise three-bedroom beachfront pad in Tarara, Cuba, where street dogs came to gnaw on pork chops and other assorted creatures were always welcome.

Sadly, though, when I visited the house in July 2008 I found that it’s now being used to store mattresses. It was evidently deemed uninhabitable for humans because water leaked through the roof and workers could never fix the leaks (I can confirm that). But at least the house is fit for mattresses.

I digress. I was telling you about my critics. Leftist-wingers have even accused me of being “a U.S. toady.”

I’m quite proud of that. Not because I am a toady, but because I’ve always wanted to use that word in a sentence. Toady, toady. Has quite a ring to it.

Some right-leaning bloggers are just as passionate in their disapproval. And some of them have also accused me of being clueless. That’s becoming a pattern, so I suppose I should worry. But I find strangely comforting that I am rejected and scorned by both the right and the left.

Bloggers on the right also contend that Along the Malecon bites a big salchicha because I’m a superficial, wishy-washy guy.

Experts say the most successful bloggers jump out on a limb and state their opinions with gusto. Said a veteran at the South Florida Daily Blog:

Throw out your opinion and let it take you where it may. Take a side. What's the worst thing that can happen?

That certainly makes sense. But as a working journalist who is striving for independence, I’d rather be a little more reserved. I’m not entirely comfortable with airing all my opinions (oh, yes, I have a vast repertoire of opinions). So this blog may just have to continue to bite the salchicha.
Still awake? Post continues here.
Posted by alongthemalecon at 5:24:00 PM

Email ThisBlogThis!Share to TwitterShare to FacebookShare to Pinterest
Labels: along the malecon, blog

This blog isn’t about politics. It’s not about condemning or embracing Cuba’s political system. -- Tracey Eaton

No, you are worse, much worse than "clueless."

You know the truth and refuse to speak it.

At best that makes you an apologist and at worst an accomplice.

To each his own

However mean your gold in wow life is,buy wow gold meet it and live it ;wow gold cheap do not shun it and call it hard names.It is not so bad as you are.It looks poorest when you are richest.The fault-finder will find faults in paradise.wow gold kaufen love your life,poor as it is.maple meso You may perhaps have some pleasant,thrilling,maplestory power leveling glorious hourss,even in a poor-house.The setting sun is reflected from the windows of the alms-house as brightly as from the rich man's abode;the snow melts before its door as early in the spring.sell wow gold I do not see but a quiet mind may live as contentedly there,cheap mesos and have as cheering thoughts,as in a palace.The town's poor seem to me often to live the most independent lives of any.May be they are simply great enough to billig wow gold receive without misgiving.Most think that they are above being supported by the town;powerlevel but it often happens that buy maplestory mesos they are not above supporting themselves by dishonest means.which should be more disreputable.Cultivate poverty like a garden herb,like sage.Do not trouble wow powerleveln yourself much to get new things,maple mesos whether clothes or friends,Turn the old,archlord power leveling return to them.Things do not change;we change.Sell your clothes and keep your thoughts.