Not exactly hog heaven, but V-twins rumble in Cuba 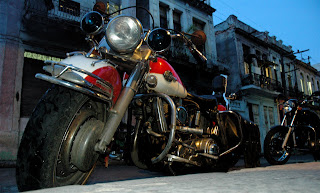 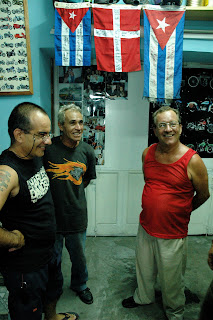 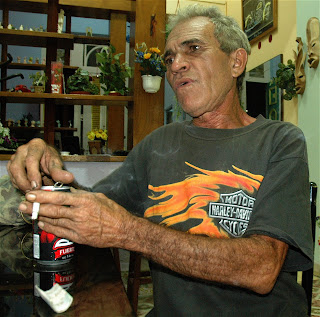 I met with Sergio Morales while in Cuba recently and he was still roaring around on an old Harley Davidson Servi-car.

"Our parents and our grandparents rode these machines," Morales once told me. "They're part of the family. And it's our duty to keep them alive."

I'm amazed at what Morales, shown above opening a Bucanero beer, and other Harley aficionados have to go through to keep their Harleys going. They make spare parts by hand. They restore and repair their old Panheads and Flatheads without any fancy tools or well-equipped shops. They are inventive, talented and largely self-taught mechanics.

"Maintaining a Harley is infinitely more difficult in Cuba than in the United States," Morales told me for a story I wrote for the Dallas Morning News. "We go through hell."

Adolfo Prieto, at left in the middle photograph, is another leader of Harley fans in Cuba. More more information, see his web site (in Spanish).
Posted by alongthemalecon at 4:04:00 PM

I read about the Harley culture in the Cuba edition of 'traveler's tales,' but I haven't been able to get to the garage on the Atares side of La Habana Vieja to see it. LIke the Hershey train, it's one of those things I have to do but haven't found time to accomplish (haven't done the tango lessons either).

I hear there are a number of international types who bring their Harleys in pieces to be rebuilt by the afficionados. I think it's just another one of those businesses that could flourish if the market had a chance to get there.

PHOTO(S): (1-4 The Dallas Morning News: Tracey Eaton) 1. Vintage Harleys are a common sight outside Sergio Morales' Havana garage, the only one in Cuba dedicated to restoring the classic bikes. 2. Sergio Morales says his dog, Harley, shown above with Mr. Morales' daughter Mildrem, likes motorcycle rides but not the sound of the engine. "I guess it's too loud. Hurts his ears." 3. Harleys in Cuba are maintained lovingly by devotees known as Harlistas, who scrounge or make their own parts. They have so many Cuban-made parts that they are considered "Made in Cuba," and their owners take great pride in them. 4. Sergio Morales: "Maintaining a Harley is infinitely more difficult in Cuba than in the United States."
Copyright 1999 The Dallas Morning News

For those who haven't gone to Havana, now is the time to do it and not when Castro is gone. I am a pride old school Havana Harley Owner. Used to fix my four Harleys with almost bare hands and handmade tools. I remember the last 1959 Panhead I bought was inside an old rusted wooden box in a very old farm in Matanzas. 150 km from Havana. We all used to make jokes like "I have a flywheel face from Pinar Del Rio and another from Santiago de Cuba!" jaja I don't know bikes from here, but "our" bies back in cuba run almost with water inside their tanks. "They are so alive that they want to remain making noise even with parts made in USSR" Los americanos no saben lo que inventaron"some of us used to say that. We used to gather by the Malecon on Saturdays nights and just talk crap about the latest inventions, racing harleys with horsed, helping a friend to fix a leak in te carburetor or gast tanks patched with resins and glue. At the end of the night, we were just a crazy group having a lot of fun in a communist country riding an American legend. 1946 Knuckleheads, 1937 flatheads, 1950, 1952, 1956, 1959 Panheads... Thank you God for letting me live and breath those unforgettable 30 years in Havana. Thanks to all of you guys for thinking about us. You know you have a family waiting for you in Havana! Thanks for all your help and support. I am sorry for my bad english.