Oldest of jailed Cuban journalists to be honored in November 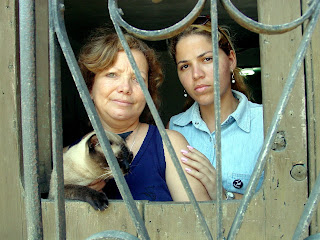 The Committee to Protect Journalists plans to award its International Press Freedom Award to five journalists, including a Cuban, Hector Maseda Gutiérrez.
The award ceremony will be at New York's luxurious Waldorf-Astoria hotel in Manhattan, the group says on its web site.
Maseda, arrested in 2003, will not be attending. He remains in prison in Cuba. According to the Committee to Protect Journalists:

At age 65, Maseda Gutiérrez is the oldest of 22 journalists still behind bars in Cuba today. He managed to write his memoir, Enterrados Vivos (Buried Alive), smuggling the manuscript out one page at a time. The book was published in the United States in 2007.

His wife is Laura Pollan, leader of Ladies in White, an opposition group whose members are wives of jailed dissidents and journalists.
Pollan, standing at left in above photo with journalist Claudia Marquez talked about her husband in a story I wrote for the Dallas Morning News in 2003.

"Destiny is so ironic," she told me. "My husband wrote a lot about prisons, and now he's in one."

Pollan was arrested and later released in April 2008 for organizing a sit-in near Havana's Revolution Square. She and nine other women at the protest said they wanted to give a letter to Raul Castro demanding that their loved ones be released. Uncommon Sense posted a detailed accounting of the arrests here.
Cuban officials play down the size and importance of the dissident movement and say the U.S. government finances it.
And earlier this month, two leading Cuban dissidents - Marta Beatriz Roque and Vladimiro Roque - asked the U.S. government to loosen economic sanctions for two months so that people would have an easier time sending hurricane aid to Cuba, the Associated Press reported.
Posted by alongthemalecon at 6:42:00 AM

Mr. Gutiérrez was a leader of 2 or 3 different political parties before he took up the "profession" of journalism. He was allowed to publish on the island for many years before he decided to begin selling his stories to entities funded by the US Government (Cubanet, Cuba Encuentro) and controlled by the most hard line exile elements. These publications pay writers to publish stories that go around the world and help foster the disinformation campaigns that are used to justify the strranglation of the country. When the US began doing this, Cuba passed a law (Ley 88) to make it illegal. That is what got him arrested.

All the other journalists given this award by CPJ are actual trained and professional journalists. Mr. Gutiérrez was a wannabe politician, an activist, before he decided that he could make a decent wage selling stories that, on more than one occassion, the US Interest's Section had actually suggested to him. One called Havana the "capital of sex tourism."

People can write whatever they want in Cuba. But when you are getting paid, indirectly, by the US Government to further their anti-Cuba aims, Cuba has a right to say no it can not permit that. For one thing, what can the neighbors of Mr. Gutiérrez think, when he is making more for an article than they make in a month - to write half-truths that denegrate the country? Who wouldn't quite their job to send "stories" to Cubanet?