One of the strangest Guinness World Records. Ouch! 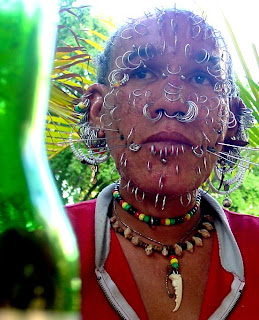 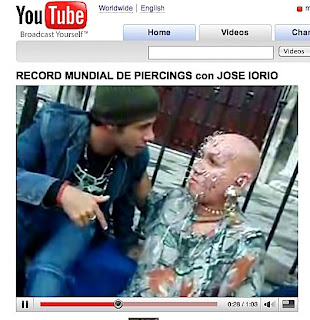 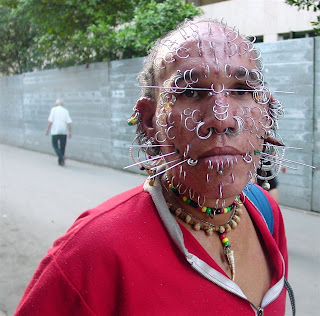 When I met Luis Antonio Aguero, he was determined to jab and poke more holes in his face anyone on earth. He evidently did it, according to Guinness World Records, which gave him credit for 230 face piercings. Now you'd think that would be painful. But Luis told me over pizza one day that he was impervious to pain. And to demonstrate - not that I asked for it - he grabbed one of the slivers of metal in his face and moved it back and forth. It kinda grossed me out.
But Luis has his fans, and when I lived in Cuba he sometimes went to Old Havana to pose for pictures for tourists.
You have to admire someone who sets a goal and goes for it. On the other hand, if he feels like this is what he has to do to make a living in Cuba, it's a shame.
In this YouTube video, he said he had reached 250 piercings. I wonder if he has more now. Anyone know?

I heard he died!

Really? Wow, that would be a shame? Anyone know what happened?

I checked Google and couldn't find any references to his death, but who knows.
I did find more on Luis from Ripley's Believe it or Not, saying he had more than 300 holes in his face.
That reference is here:
http://www.sonypictures.com/tv/shows/ripleys/database/ep_215b.html

A friend e-mailed me from Havana saying she spotted him a few months ago on Calle Obispo in Old Havana. So the mystery continues.

I saw him two weeks ago (December 2009) in Habana Vieja. He is definitely still alive!

Thanks for the update!