Shaking off those Cuban communists. Not as easy as you might think. 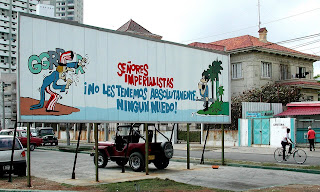 Politics and animosity continue to entangle efforts to send aid to Cuba, still reeling from hurricanes Ike and Gustav, which the Cuban government describes as the most devastating storms ever to hit the island.
Current U.S. policy on hurricane aid is tied to the idea that the socialist government is about to crumble. Predicting that kind of thing is not easy. Just ask Andres Oppenheimer, author of the book, "Castro's Final Hour." It was published in 1993.
Fifteen years later, American officials don't want to loosen economic sanctions to make it easier for Cuba to buy such things as construction supplies because the end of the socialist regime may be near.
"We don’t want to give them a lot of breathing room at a time where we believe change will happen," U.S. Commerce Secretary Carlos Gutierrez said during a Q&A after he spoke Monday at Harvard Kennedy School’s Institute of Politics.
On Sept. 20, Fidel Castro wrote that Cubans shouldn't take U.S. aid that is funneled through non-governmental organizations that also accept money to try to undermine the socialist government.
Cuban Foreign Minister Felipe Perez Roque says the U.S. government currently has budgeted $46 million for "mercenary groups in Cuba, with the aim of promoting internal subversion" and $40 million for "illegal, anti-Cuba radio and television broadcasts."

"This is not even taking into account the CIA and other agencies," Granma quoted Perez Roque as saying.

The hurricanes caused at least $5 billion in damage, Cuban officials estimate. At least 444,000 homes were damaged and 63,249 were destroyed, according to a Cuban government preliminary damage report published Sept. 15. Some 200,000 Cubans remain homeless.
Fallout from the hurricanes affects the entire nation of 11 million people. Cuban officials expect a "food crisis" that will last at least six months, the Associated Press reported.
Meantime, Cold-War politics dominate the debate over hurricane aid, a Chicago Tribune editorial said.

In the twisted exile logic that has long dictated our policy toward Cuba, letting them go hungry is something we do for their own good. They'll thank us later, after they shake off the communists and see the light. Not likely.

When the Castro brothers are history and the Cuban people contemplate what comes next, what they'll remember is that in September 2008, Hugo Chavez and Vladimir Putin were their friends. And we weren't.