Should Fidel Castro, columnist-in-chief, start his own blog? 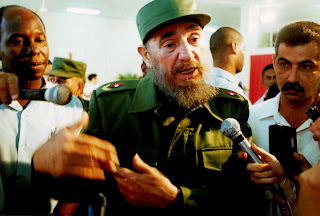 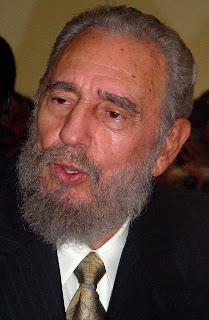 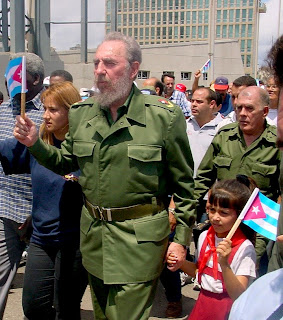 Fidel Castro has not appeared in public for more than two years, but stays busy as Columnist-in-Chief. His newspaper columns, dubbed Reflections, appear regularly in Cuba's state-run media. (Reflections in English; Reflexiones in Spanish).
In one of  his latest Reflections, Fidel comments on the financial meltdown on Wall Street:

The hurricane winds of financial Ike also threaten all provinces of the world. The weather forecast is uncertain…
It is very difficult to monitor and understand the fabulous sums of new money that are injected into the global economy…
Inflation is inevitable in consumer societies and disastrous for emerging countries…
Fiscal paradises prosper; people suffer. Does that by any chance ensure the well-being of humanity?

As usual, the former Cuban president signs off with the exact time and date. In this case: Sept. 18, 2008. 8:46 p.m.
Obviously, Fidel Castro is a detailed-oriented guy. I once attended a speech of his that lasted more than six hours. I thought his talk was interesting. And yes, it was detailed, although a few foreign diplomats missed some of the minutia because they chose to doze behind sunglasses and Panama hats.
That wasn't even Fidel's longest speech. In 1986, he spoke to the Communist Party Congress for seven hours and 10 minutes, according to the Independent newspaper. And he holds the Guinness World Record for the longest speech at the United Nations, a paltry four hours and 29 minutes. (A four-part transcript of that 1960 speech begins here).
So it's not as if Fidel Castro doesn't have an opinion or two. And judging from his Reflections, he stays on top of things. He is well informed. He has experience (nearly a half century as a statesman, president and revolutionary has got to count for something). And I'm sure he's Internet savvy.
So I think he ought to start his own blog. Why not? Whether you love him or hate him, Castro has been at or near the center of many momentous events - the Cold War, the Cuban Missile Crisis, the Bay of Pigs invasion and more. I'll bet he could write a helluva blog.
Then we could do a little experiment: Put his blog next to Generación Y , hook up the hit counters and let's see which blog gets more traffic.
What do you think? Should Fidel Castro start his own blog? And what should he call it?
Posted by alongthemalecon at 10:27:00 AM

Ha! Yeah, why not? I'm sure he'd get lots more visitors than Generation Y. No doubt.

But, I feel that his writings for Granma are more aimed at the Cuban people in a personal sense. It also helps grant Granma, and other sources of state run media, the legitimacy of being "for the people."

It helps form allegiances to the state media. I see this form of allegiance evident in Radio Marti and Radio Mambi, both of whom make sure to treat any comments from top US officials as almost sacrosanct.

I would be interested in reading and hearing what Fidel thinks when he's not "on," you know, when he's at home or with his inner circle.
Then again, I read somewhere - I don't remember where - that he's always "on" and that his private persona isn't all that different from his public one. That doesn't seem terribly realistic, but who knows?

Castro's "Reflections" are not actually carried in the printed edition of Granma but only on its website. Since the regime denies internet access to 95% of Cubans, this means that few Cubans are exposed to his addlebrained ramblings.

Fidel does in fact seem to be rather jealous of Yoani's popularity and aimed some barbs at her when she was awarded Spain's Ortega y Gasset Prize.

If he grows too discontented with her success Fidel can always have her jailed or shot. That's his prerogative as dictator emeritus.

So I guess that Pancho is right. Fidel could get more visitors to his "blog" if he had one. He knows how to handle the competition. No doubt.

"[Fidel Castro] has experience (nearly a half century as a statesman, president and revolutionary has got to count for something)." -- Tracey Eaton

Wrong all three counts: Fidel has never been a "statesman," "president" or "revolutionary."

Esteemed Manuel,
I won't quibble with you over what to call Fidel Castro.
Some newspapers and wire services use such titles as president or head of state instead of dictator or tyrant in an attempt to be even-handed. But there is some disagreement in the journalism world over how to handle titles of such controversial figures.

Esteemed and All-Knowing Manuel,
I have seen Castro's Reflections printed in both Granma and Juventud Rebelde in Cuba. I scanned two examples and posted them today in case you're interested.

Well, at least you have my titles right.

Why is it more "objective" to call Castro a "president" (which he is not and never was) than to call him a dictator (which he was for 49 years and may still be)?

Thank-you for the scans from your hometown newspaper (I guess you want to keep up with party news). Fidel's columns do occassionally appear in the printed edition of Granma and always in the digital edition. It is now always noted that the column is reprinted from the website CubaDebate, which is the official venue for Fidel's columns.

In fact, since his columns appear first (and sometimes only) on CubaDebate, Fidel could indeed be considered a blogger. Of course, no "Comments" are allowed on his "blog." Well, no comments have been allowed in Cuba for 49 years.

Thank you for the additional information, Holy One.