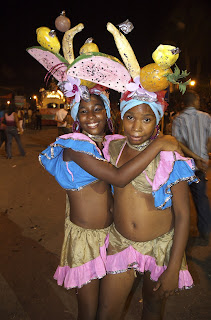 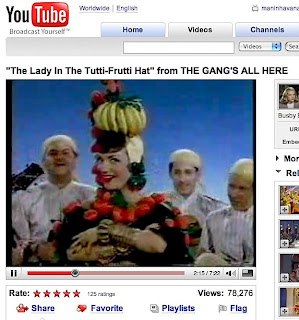 Look out, Carmen Miranda. You may have a little competition in Santiago de Cuba. These children are wearing your trademark tutti-frutti headgear.
Now in case you haven't heard of Carmen Miranda, she's the Brazilian bombshell who danced and sang her way to fame, but died young after a fall - at just 46. This video shows her in her tutti-frutti hat. For information on Miranda's new DVD box set, click here.
Or, in case you're interested in some offbeat new research, you should know that scholars at Ohio and Cornell universities recently reported on the psychological impact of being forced to wear fruit on your head. Really. From a report in the Guardian:

...The test subjects "were taken outside to a highly trafficked, grassy quad at the centre of campus ... The experimenter handed subjects a Carmen Miranda costume, including a grass skirt, coconut bra, hat adorned in plastic fruit, and flower lei. Subjects were told to put on the costume, walk the width of the quad alone, and return, before answering questions about their emotions and their experience."

The researchers' conclusion: If you have no choice but to wear the fruity headgear, you'll estimate you walked a longer distance with it on your head than those who felt they had a choice to traipse around with the fruit.
Posted by alongthemalecon at 8:25:00 AM