Hog wild: Anyone have stories about Harley-Davidsons in Cuba? (updated) 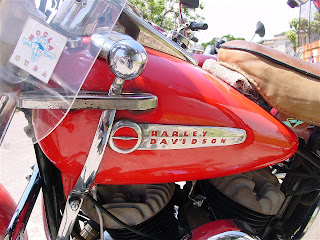 While in Cuba, I interviewed Sergio Morales, Adolfo Prieto and other riders of old Harley-Davidson motorcycles. I am writing a story about the Harlistas in Cuba.
If anyone has any interesting, enlightening or entertaining stories about Harleys in Cuba, please send them in. I'd love to hear from someone who has toured Cuba on a Harley or had some kind of experience with the Harlistas. Thanks!
Update: I finished the story and it appeared in an issue of CubaNews that went out today. The story may also appear in the December issue of a national motorcycle magazine. 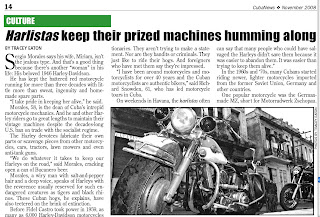 P.S. Below is a video of two Harlistas taking part in a "slow race," a race to see who finishes last. Adolfo is on the white Harley and it looks like he put his foot down on the ground, which gave the race to his opponent.
Posted by alongthemalecon at 10:01:00 AM

Hi, I am planning to make a visit to cuba with my own motobike. Do you hava a email-adrress of the LAMA or another motocyclist association? Would be mmuch appreciated.

Here's an e-mail address for LAMA in Havana:
lamahabana@yahoo.com

Adolfo Prieto is the president.

Here's a link to the LAMA Web site in Havana:
http://lamahabana.synthasite.com/