Be like Che? Yes, some say. No way, others declare 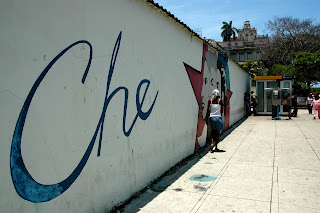 Exactly 41 years after Che Guevara was killed in La Higuera, Bolivia, the Argentine inspires everything from admiration and respect to hostility and anger.
In Cuba, children are taught to "be like Che." And yesterday, on Oct. 8, more than 130,000 first-graders in Cuba received their blue scarves and were made members of the Pioneros organization, according to Juventud Rebelde.
But some say they don't understand why Che gets so much attention. When he was captured, Che "wasn't the figure of the heroic guerrilla," Gen. Gary Prado told the Associated Press in a 2007 interview.

Che "wasn't someone to inspire terror or anything, but simply to be pitied," Prado said.

The photographer who took the picture of Che that turned into the iconic image of Guevara as a revolutionary was a colorful figure named Alberto Korda. He once confessed that a major goal in life "was to meet women." And he told young photographers not to worry about fancy cameras - any $4 camera will do. While in Cuba, I never interviewed Korda, but I met him at a reception one evening. He was smiling, drink in hand, and was busy mingling with everyone there.

Fidel Castro's critics accuse Castro of abandoning Che in Bolivia, failing to support him there because he didn't want another strong leader figure around. Cuba's state-run Granma newspaper today quotes a Castro interview in which he calls Che "one of the most noble, exceptional and altruistic men I have ever known." 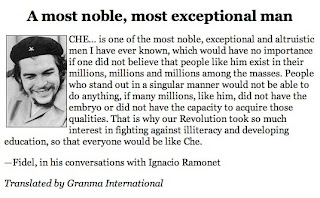 In many ways I think Che had his heart in the right place. He was a zealot and I think what drove him more then anything is he saw people suffering and wanted to change that.

However some of the tactics he used to do this were sometime pretty ruthless, which has long been a curse for many a zealot.

Yeah, it's disturbing to read some of the accounts of executions that occurred right after the revolution in Cuba.
But there are always going to be people suffering somewhere. They're going to look for change and for hope, and a lot of people latch on to symbols. And that seems to be why Che is an enduring figure.
It's something how Che's image, that famous photo, can be found all over the world. I first saw it on a postcard when I was an exchange student in Antalya, Turkey, in 1976.

It's a small world.
Antalya was a sleepy place when I was there. I see it has grown.

Yes, cavalier as it undoubtedly sounds, "there are always going to be people suffering somewhere." But very rarely are the homicidal psychopaths who inflict the suffering deified as humanitarians.