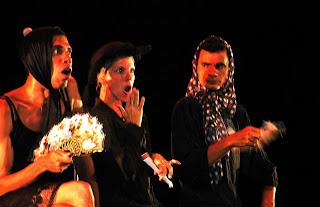 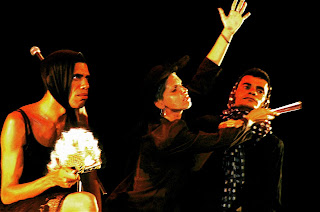 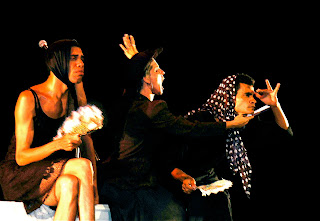 Cuban artists and entertainers this month are honoring a Cuban actor for his 15 years of making people laugh, often at the expense of the government, a Guantanamo newspaper reports.
Miguel Moreno routinely takes jabs at Cuba's social and economic ills. For years, he has performed as part of a trio known as the Komotu group. I saw the group one night and was a bit surprised at how freely the actors criticized the socialist system.
Komotu is shown in the photos above. Moreno is at right, Alexis Ayala is at left and Yasnai Ricardo (alternate spelling - Yasnaya) is in the middle.
Moreno said in a recent interview that the group hasn't appeared together much lately because Ayala is traveling, Ricardo is pregnant and he - Moreno, that is - is getting more involved in television.
Posted by alongthemalecon at 10:13:00 PM