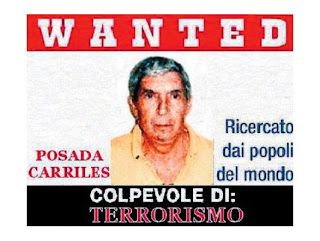 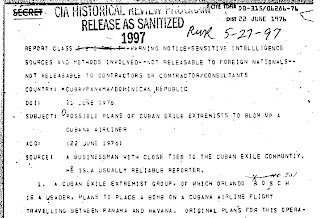 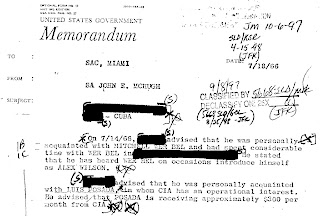 Today is the 32nd anniversary of the bombing of a Cubana airliner that killed 73 people. The best spot I've seen for declassified documents showing CIA connections to the bombing is the National Security Archive, a private research institution at George Washington University in Washington, D.C.
Two years ago, the group posted new documents in the case on the 30th anniversary of the bombing and the New York Times wrote this story. I don't see any fresh documents about the bombing yet on the NSA site this year, but the old ones are worth checking out. The documents - including this memo - provide concrete proof that the CIA knew in advance that Cuban exiles planned to bomb a plane.
The bombers used a "pencil-type" detanator to set off plastic explosives disguised as a tube of Colgate toothpaste, the documents show.
If you're into declassified documents, the NSA Web site is a great resource. A Washington Post profile of the group started with this compelling lead:

Stoned on speed, Elvis Presley arrived at the White House wearing a purple velvet suit and bearing gifts for President Richard Nixon -- a Colt .45 pistol and some silver bullets.

It was Dec. 21, 1970, and Elvis had a mission: He wanted Nixon to give him a federal narcotics agent's badge so he could carry dope and guns wherever he went. Nixon didn't give Elvis the badge, but he did pose for pictures with the King of Rock-and-Roll.

Cuban relatives of the victims of the 1976 attack continue to ask for justice in the case. One of their statements can be found in English here.
According to this report, the 73 victims included:
- 11 Guyanese youths, including six who had planned to take medical courses in Cuba
- five North Koreans who were on a friendship tour of Latin America
- Cuba's entire juvenile fencing team
“It is an incalculably deep wound,” said Odalys Perez Rodriguez, older daughter of pilot Wilfredo Fello Perez, who was killed in the attack.
Two men accused in the bombing - Luis Posada Carriles and Orlando Bosch - live in South Florida and are regarded as heroes by some in the Cuban-American exile community.
Activists on Tuesday plan to charge Posada Carriles with terrorism, symbolically at least, in an event in New York, according to the Daily News. Here's the event flyer. 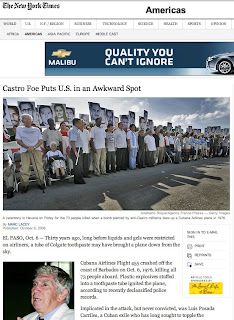 How quaint! Are they going to keep trying 80-year old Posada Carriles after he's dead? Perhaps unburying him on the anniversary of the plane bombing and hanging him "symbolically?"

The fact is that Posada Carriles has already been tried in both civil and military courts in Venezuela and acquitted.

If this were not enough, a Cuban double-agent confessed in a U.S. federal court that he was responsible for the destruction of the airplane and that he acted under orders from Fidel Castro.

Castro has refused to be allow the Cubana de Aviación plane to be lifted from the water. The British, however, conducted an investigation at the crash site which concluded that the Castro version of a bomb having been the cause of the explosion could not be supported by the evidence.

BTW, did you know that Raúl Castro orquestrated the world's first airplane hijacking in 1958, off the Bay of Nipe, in Cuba, which cost the lives of several Americans?

When is he going to be tried? Symbolically or otherwise?

Or now that Castro is no longer head of state, when is he going to be indicted by Spain for the deaths of Spanish nationals as was Pinochet in his final days?

Or when is Castro going to be tried by an international war crimes tribunal for the murder of 104,000 Cubans?

As long as we're picking and choosing what legal cases to include here, let's throw in that a court in Panama convicted Posada Carriles of an alleged conspiracy to assassinate Castro.

Do you have any gripes with the conspirators who tried to assassinate Hitler?

The Germans who honor Hitler's would-be assassins with a national holiday certainly consider them heroes.

No doubt in a future free Cuba those who tried to end the tyranny by disposing of the tyrant shall also be honored.

Remember this when you pass by Posada Carriles' statue some day in Cuba.

Cubans don't need to be "reconciled." They are one people separated by one tyrant. It is the tyrant and his brother who must reconcile themselves to the fact that Cuba is not their personal fiefdom.

thanks for your comments

I'm not passing judgment on Posada Carriles. As a journalist, I'd be interested in interviewing him.

No offense to you Tracy, because I know that sentiment comes from a sincere place. But I wholeheartedly feel this is the problem with US journalism. Here we have someone who the US government has called a "terrorist mastermind" - someone who has admitted killing civillians as part of his duty. We know Islamic terrorists get no such luxury of non-judgement. So I feel this journalistic code is selective at best (again not talking about you, but US journalism in general).

Manuel, your "information" suggesting LPC is not guilty is... interesting (cough). Provide us some links please so we can see what the heck you are talking about with Cuban double agents and British forensic studies... We know the "aquital" line is complete rubbish because he was being tried by a partial military commission who's decision was overturned. He then was broke out of prison by bribes from Jorge Mas Canosa (ex head of CANF) before a proper civillian trial could resume. The evidence him is overwhelming... your defense of an admitted murderer of innocents is... well I won't pass judgement.

No offense taken. I understand your point.

Which do you choose to believe, facts presented by experts presented from a free society, a man who has spent his life fighting for the freedom of his homeland, or the word of a dictator.

Ziva,
Thanks for passing along those links. I'll check them out.
Tracey