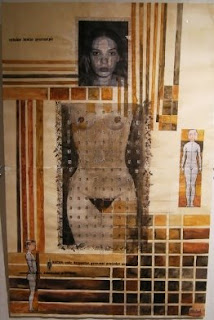 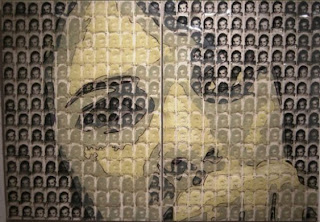 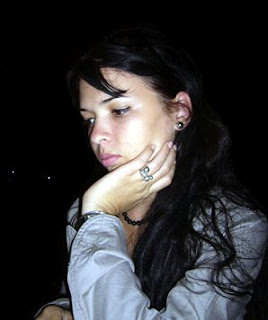 The work of a young Cuban artist named Mabel Poblet will be shown at a New York City gallery through mid-October. The artist was not able to attend the opening of her show in September, American Sandra Levinson says.

"...the State Department seems to think that Cuban artists represent a threat to our national security."

Levinson runs the Center for Cuban Studies' Cuban Art Space. The center led a 1991 lawsuit against the U.S. Treasury Department that legalized the sale of Cuban art.

Levinson says that one of Poblet's pieces shown in New York in 2006 "consisted of 3,136 tiny screen prints of herself as a baby, and when viewed from a distance a current portrait of herself emerges. It was put together with 12,544 nails on canvas nearly eight feet by six feet. (The fact that she KNOWS how many prints and nails is telling.)"

Levinson writes of Poblet, pictured above in a photo that is not mine:

In her earliest works on paper, starting when she was 16, she used family photographs and collages with her drawings to tell the story of a divided family, one she brought together in her art. Her parents’ divorce disappears in these works, mother and father surround their daughter in a loving relationship. Her own beautiful face and body, vulnerable, even modest while naked (sometimes age three, sometimes 20) seems to float through an uncertain world.

The next exhibit at the Cuban Art Space gallery will feature Alejandro Lazo, who began painting at age 16. He will be able to attend showings, Levinson says, because "although he is Cuban, he is currently living in Spain, and is therefore allowed into the United States."

His work explores Palo Monte or Palo Mayombe, sometimes called "the dark side of Santeria," which Levinson says is "in fact a quite different religious/spiritual/mystical experience."
Posted by alongthemalecon at 5:55:00 AM

I'm sure Poblet does dream of floating through space en route to the U.S., whether naked or not. That is the dream of all Cubans. That much, at least, I hope you gathered from your residence in Cuba.

BTW, I also disapprove of the rejection of Poblet's visa. You can't have defectors if you don't let them come here.

My advice to Poblet would have been to defect at Kennedy or LaGuardia. Once she came into the custody of the Cuban Mission, she would be held as a hostage until her return to Cuba.

It really isn't the dream of all Cubans to leave Cuba. All Cubans? All 11 million? No way.
A lot of people want to leave because of the terrible economic conditions, for sure.
But I have met plenty of Cubans who would rather stay put.
There is a certain doble moral at times. I knew one Cuban for at least a year, maybe two, before he admitted to me that he dreamed of leaving. I had always seen him as a loyal revolutionary, but he evidently was not and his admission came as a surprise.
The doble moral question, by the way, is fascinating. I'm sure you've seen the surveys of Cubans arriving to the U.S., showing high levels of unhappiness with the situation in Cuba - things that many of them might not want to talk about openly in Cuba. But once they get to the U.S, they talk about it. I can't remember who does the surveys. Maybe FIU.

A lot of people want to leave Cuba because it's a one-party police state, too. Except as a privileged foreigner would you consent to live there yourself?

Maybe if you had the opportunity to get to know 11 million Cubans over a year, they, too, might reveal the secret of their hearts to you.

I trust, at least, that you know why it is a secret.

I've sometimes wondered what my attitude toward the Cuban government would be if I had been born there. Would I be loyal? Would I be a dissident? The answer is impossible to know.

As a foreigner, I won't ever know what it's like to be in the shoes of a Cuban who lives there now.

Nor would I know what an exile in the U.S. must feel like.

I know attitudes toward the Cuban government are changing. Surveys show U.S. economic sanctions have less support than in the past. And many young Cubans leaving the island don't agree with the exiles who left in 1959 and in the 1960s.

Freedom is not just the birthright of free men, nor is the absence of freedom a matter of inconsequence to men who were not born free.

Why is it such a conundrum to you whether you would be loyal to a regime that denies freedom to you and your countrymen?

And why do you think so little of Cubans as to suppose that they would?

The reason I say I don't know whether I'd be a dissident or a Castro loyalist is because I don't know how I'd react to a lifetime of the daily dose of Granma, of Cuban television, of hearing about Che in grade school, of growing up under Fidel. Of course, I value freedom.
But you make some excellent points, Manuel. You raise good questions. You make me think... and that is a good thing.