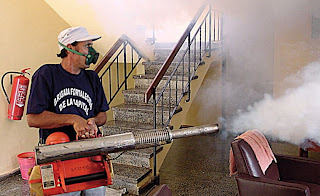 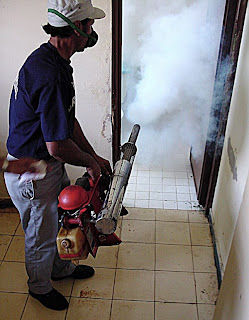 Cuba has begun a new campaign to wipe out the mosquitoes that cause dengue fever, El Nuevo Herald said in this report earlier this month.

Cuba has been more successful than most Latin American nations in controlling dengue fever. There were no cases reported last year, Juventud Rebelde said in this story.

There was a nasty outbreak in Cuba in 2001-2002. More than 14,000 people contracted dengue and three died. Workers went around Havana house-by-house spraying huge white clouds of who-knows-what chemical to kill any mosquitoes. I objected when they came to my house in Tarara because I couldn't get a clear understanding of what they were spraying. I eventually relented. The spraying left a fine white mist over everything, including dishes, glasses, etc.

The spraying would make for an interesting study of collective vs. individual rights. People who don't cooperate with fumigation workers face jail time and fines.

Dissident leader Martha Beatriz Roque, portrayed in this recent story, said the spraying made her sick the first time around, so she refused cooperate. Authorities arrested her four times. She was taken away and female security agents strip searched her after at least two of the arrests, she told me for a story in 2002.

They do it to humiliate you, she told me.