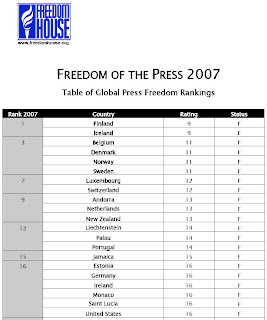 Two Prensa Latina journalists will be allowed to report from the United Nations after all, the Associated Press reported.

WASHINGTON (AP) — The United States has reversed itself and decided to allow two journalists for the Cuban news agency Prensa Latina to return to their posts at the United Nations, the State Department said Wednesday.
The department's original decision to deny re-entry to husband and wife team Tomas Granados Jimenez and Ilsa Rodriguez Santana had drawn condemnation from the press advocacy groups Reporters Without Borders, based in Paris, and the New York-based Committee to Protect Journalists.

The reasons for the initial visa denials are unclear. U.S. authorities may have suspected the reporters of espionage. They may be retaliating for something they think the Cubans did. There could have been a logistical or bureaucratic hitch. Who knows. The AP story says visa cases are confidential.

Press freedom organizations frequently criticize Cuba, of course, and New York-based Freedom House puts the country near the bottom of its annual press freedom world rankings; Cuba tied for 96th place, behind North Korea which was dead last in 97th place. That is not a big surprise.

What you may be surprised to know is that press freedom in the United States has declined and Reporters without Borders in 2007 put 15 countries ahead of the U.S. They were:

The website here can help you to succeed in your marriage immigration interview. it is a easy to sort out all the queries.