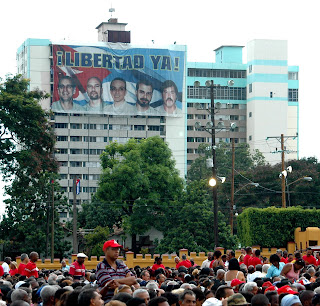 Olga Salanueva said she never wanted to be in the public eye, but now her life revolves around an international campaign to try to free her husband Rene Gonzalez from prison in the United States.
Her husband is one of five former Cuban agents whose photos are splashed across buildings, billboards and posters all around Cuba.
All five agents are in American jails. U.S. officials say they formed part of Cuba's so-called Wasp spy network, which was active in Florida in the 1990s.
Cuban officials contend the five are "political prisoners" and should be released.
The State Department calls that "misinformation," according to this report. 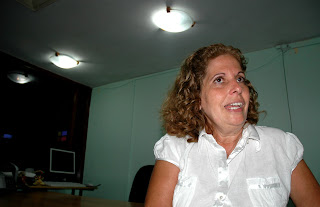 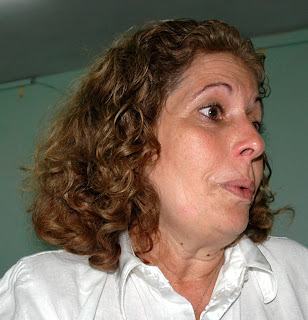 Salanueva, shown above, told me in an interview that she only wants to be with her husband again. But U.S. authorities have not allowed her to visit him, rejecting her visa requests nine times and telling her the last time that she is permanently ineligible.
U.S. authorities say they are justified in the denials because Salanueva and another wife of a Cuban agent, Adriana Perez, are espionage threats.
Salanueva denied that during our interview, saying that she's not a criminal. (The complete interview with Salanueva is here, in Spanish. An interview that a New York Times reporter and I conducted with Adriana Perez is here and here).
Salanueva, 48, said she entered the U.S. legally in the 1990s, arriving by plane.

She said she believes that U.S. authorities deny her visa requests because they want to punish her and ruin her relationship with her husband. And she said that's when she feels a surge of strength.

They've tried to do everything, but what they'll never be able to take away is our hope and our happiness. That's is ours and they're not going to get that.

She and her husband's daughter, Ivette, was born in Miami in 1998 just four months before Gonzalez was arrested. The child is now 10 years old and her father remains in prison, serving a 15-year term.
Rene Gonzalez was also born in the United States - in Chicago to Cuban parents in 1956. He returned to Cuba with his parents in 1961. 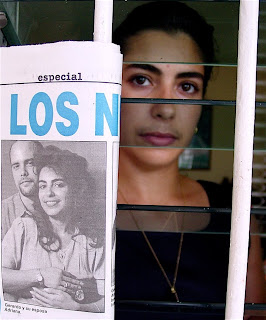 This 2001 photo, above, shows Adriana Perez
The Cuban government says the five agents were spying in Florida to try to prevent violent Cuban exile attacks on their country.
But in September, the U.S. Court of Appeals for the 11th Circuit upheld the convictions and sentences of two of the Cuban Five - Gerardo Hernandez and Rene Gonzalez, according to this report.
The other three agents - Antonio Guerrero, Ramón Labañino and Fernando Gonzáles - are expected to be resentenced in a Miami federal court.
The agents' lawyers, meantime, plan to turn to the U.S. Supreme Court and have until Dec. 1 to make their case.
Another 2001 photo, below, shows Maruchy Guerrero, sister of agent Antonio Guerrero. 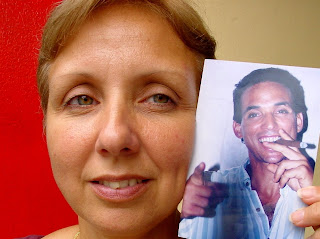