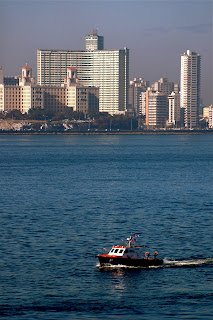 A Brookings Institition report, Rethinking U.S.–Latin American Relations, recommends a dramatic shift in America's approach to Cuba.
Brookings is a private non-profit public policy group based in Washington, D.C. Its Partnership for the Americas Commission created the report, which went out today. Commission co-chairs are:
Ernesto Zedillo, former president of Mexico, and Thomas R. Pickering, former U.S. Under Secretary of State for Political Affairs. 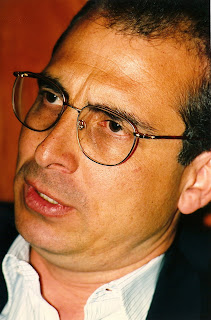 Above is a photograph I took of Zedillo during one of the numerous interviews I had with him while he was president of Mexico from 1994 to 2000.
The Brookings Institution report, available here, recommends that the U.S. government:

■■ Lift all restrictions on travel to Cuba by Americans.
■■ Repeal all aspects of the “communications embargo” (radio,
TV, Internet) and readjust regulations governing trade in
low-technology communications equipment.
■■ Remove caps and targeting restrictions on remittances.
■■ Take Cuba off the State Department’s State Sponsors of
Terrorism List.
■■ Promote knowledge exchange and reconciliation by
permitting federal funding of cultural, academic, and sports
exchanges.
■■ Provide assistance to the Cuban people in recovering from
natural and human-made disasters.
■■ Encourage enhanced official contact and cooperation between
U.S. and Cuban diplomats and governments.
■■ End opposition to the reengagement of the international
community with Cuba in regional and global economic and
political organizations.
■■Work with the members of the European Union and other
countries to create a multilateral fund for civil society that
will train potential entrepreneurs in management and
innovation.
Posted by alongthemalecon at 11:09:00 AM