A rare photograph of Fidel Castro wearing pajamas in 1959 Photos of Fidel Castro wearing a sweatsuit are familiar by now, more than two years after he fell ill. Above is a variation on that theme. I don't know who took the photo. My guess is that a Cuban photographer traveling with Castro took the picture during the Cuban leader's 1959 trip to Houston. I think the boys are the American children of one of the Texas VIPs who was showing Castro around. 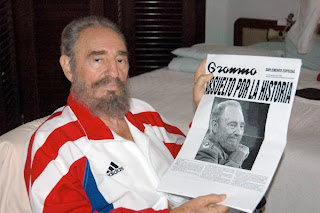 The photo above appeared in Cuba's state-run press in August 2006. It was the first published after Castro resurfaced after undergoing intestinal surgery. Some bloggers speculated that the image was manipulated.
Posted by alongthemalecon at 11:51:00 PM

I love to take some photograph because i usually travel too much,one day i saw a site called
costa rica homes for sale
and it seemed very wonderful, and i am very exited, now i want to visit this beautiful country and take a lot of photos.