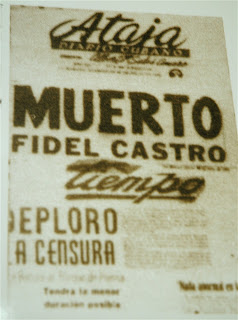 Without warning, the buzz begins: Fidel Castro is dead.
At least a few times a year, rumors say the Comandante has kicked the cubeta - the ol' bucket - and people are convinced it's true.

Castro's enemies have wanted him dead for a long time. A Cuban newspaper declared him kaput in 1953.
MUERTO FIDEL CASTRO, read the banner headline.
I saw the newspaper, shown above, on display at a museum in the Moncada barracks in the eastern city of Santiago de Cuba. Castro and his followers attacked the barracks in July 1953. Dozens of people were killed, but Fidel Castro and his younger brother Raul escaped.
More than five decades later, Raul Castro is president and Fidel is churning out opinion columns from an undisclosed location in Cuba. And until he moves on, the rumors of his death will surely continue. 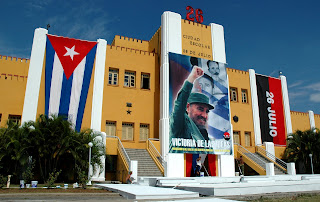 The Moncada barracks, above.

Sometimes news organizations ignore the rumors. Other times they report on them.
In one story, the Miami Herald quoted Rita, a financial analyst who worked at a government meatpacking plant.

”I heard rumors about the rumors,” she said.

Another quote came from an 80-year-old identified as “Juan."

“Some people say he’s already been cremated, and others say they have him preserved in wax somewhere, but nobody really knows anything,” he said.

I read about the Herald story in a blog called Castro Death Watch, which, as you might guess, is dedicated to this sort of thing.
Posted by alongthemalecon at 5:59:00 AM